On July 22, the Church celebrates the feast day of St. Mary Magdalen, a close personal companion and follower of Jesus, and one of the women present at the crucifixion. She is the only person of whom it is reported in all four Gospels, as having been a witness to the resurrection of Jesus. On that Easter morning, Jesus told Mary to go and tell the apostles that he had risen and thus, she is considered the Apostle to the Apostles. “Mary Magdalene found the disciples and told them, ‘I have seen the Lord!’ Then she gave them his message” (John 20:18). Among Dominicans, she is treasured as the first to preach the Good News of the Risen Jesus.

But most people don’t think of her that way. Mary Magdalene is frequently identified as a prostitute in popular culture, a sinner who was cured of seven demons. Or, it is speculated, that she was possibly the wife of Jesus, if you believe Dan Brown, the author of the provocative novel, The Da Vinci Code. The book made Mary Magdalene a celebrity a few years ago and made Dan Brown a gazillionaire. I wonder what she thinks of that.

Was it true? Does she deserve the prostitute reputation? All those depictions of her in paintings as a harlot, an adulterous woman, a sinner – with a mournful pose and repentant gaze – is it true? The 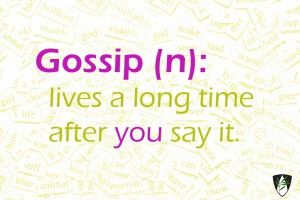 answer is no. The truth is that Pope St. Gregory the Great, in 591 AD, wrote a homily in which he connected Mary Magdalen’s seven demons as the seven deadly sins, a construct in Gregory’s mind, a useful literary tool to make a point at the time. [In case you don’t know, the seven deadly sins are: wrath (or anger) greed, laziness, pride, lust, envy, and gluttony.] Of course, the worse possible sin is lust, the big “S” which stands for sex. Pope Gregory’s words stuck, the damage was done, and it would seem that her reputation would be sealed forever.

For 1,400 years she has had a bad reputation. The Gospel reading for Mary Magdalene’s feast on July 22 used to be the story of the repentant sinful woman and her “tagline” was Mary Magdalene, “Penitent.” Recently, things got a little better. In 1969, the readings for her feast day were changed to the story of her encounter with the Risen Jesus and her commission to “go and tell the disciples” (John 20:1-2, 11-18). Much better don’t you think?

You might say that Mary Magdalene suffered from a kind of identity theft. What we know of her reputation has been distorted for more than 1,400 years. That’s a long time to wait until you can straighten things out. You and I don’t have that much time, so be careful. When you hear a rumor or sniff some gossip, it may feel cool to be in the in-crowd, to have that secret guilty pleasure in being part of those “who know.” But think again. How would you feel about being on the other side of that?

What would you say to Mary Magdalene?