Great Bend, KS – At it’s annual meeting, the Dominican Institute of the Arts (DIA) named Dominican Sister of Peace Elaine DeRosiers, OP, its 2015 Fra Angelico Award recipient. The honor is presented every year to a DIA artist who exemplifies Fra Angelico’s dedication to furthering the Holy Preaching through the arts.

DIA President Barbara Schwarz, OP, in presenting the award, said, “Our Fra Angelico winner this year, bridges many worlds: an educator both in the classroom and on television; a media specialist who could provide her own graphics. For 21 years she was Director of Educational Media at Notre Dame University and for many of those years, she coordinated an international film series. A meditative dramatist: she has graced us and many others as Jane of Aza, Catherine of Siena, and Mother Teresa. Elaine served as Promoter of Ongoing Dominican Life and Promoter of Preaching for the Dominican Sisters of St. Catharine, KY. She was a communication specialist with a vitae too long to quote here. And for those of us at DIA who remember, we enjoyed her giftedness as our newsletter editor.”

On receiving the award, Sr. Elaine said, “When I realized I was a creative soul, it took me by surprise and receiving this award gave me the same feeling.” 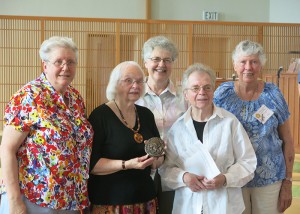 Earlier Sr. Elaine said, “When I am a little old lady, I will paint.” “Well I don’t think you are little, Barbara continued, and old these days is a question.” Sr. Elaine was already providing her own graphics in the 1960s as a television teacher of the World of Biochemistry on Boston Catholic Television. She has won awards for her paintings. She has taken painting courses, done the Main Street Springfield KY series and started a series of paintings depicting the Motherhouses of the founding congregations of the Dominican Sisters of Peace.

Barbara concluded, “I am personally glad to know you and wonder when you run out of Motherhouses, I wonder which character you will play next.  I just know in you the preaching will continue.”