“And don’t sin by letting anger control you. Don’t let the sun go down while you are still angry, for anger gives a foothold to the devil.”

Hello, my name is Anne and I was addicted to Angry Birds. Yes, I played and won the original iPhone game – that hilariously funny collection of avian aviators who swoop down to eliminate the evil green pigs. The game is so uber popular, it spawned numerous versions, and boasts 263 million monthly users. But after I succeeded in the final challenge, defeating the King of the Pigs who stole the eggs, I rested on my laurels and hung up my slingshot.

And now, the angry birds are back with Angry Birds 2 and I am once again flinging those cute little birds across the sky, hoping that I can maintain my sanity and resist the temptation to be addicted again, but they’re so darn cute.

The trouble is the slogan that appears periodically in the corner of the game screen. It provokes me. It declares: pain is temporary, anger is forever.

Of course, they mean that Angry Birds are forever. But it bothers me…. Pain is temporary, anger is forever. I hope not! I have been deeply pained in my life, over loss of loved ones, over fractures in relationships that are important to me, over decisions made that I disagreed with. I imagine that you have some of those experiences too. But over time, the pain does soften, and it’s true, sometimes the anger lingers long after the pain is just a memory. I am still angry about a few things that happened, even though, intellectually, I have come to see things as they are and I have come to accept what happened.

It’s that still being angry part that is a bit challenging. Is anger forever?

The slogan reminds me of what St. Paul says in the Letter to the Ephesians in 4:26-27:

“And don’t sin by letting anger control you. Don’t let the sun go down while you are still angry, for anger gives a foothold to the devil.” 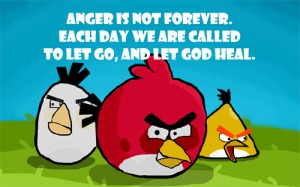 I don’t have a magic formula that eliminates my lingering anger over things I cannot control or memories I cannot change. And some of it happened years ago. It isn’t really over, if I am still feeling angry about it. But I try to be gentle with myself asking God to help me soften the aggravation that flares up inside when I remember painful things, or painful times.

Dear God, help me to soften my lingering anger over old pain and to be gentle with myself and others. Remind me to practice forgiveness and to have the courage to ask forgiveness of others. Amen.