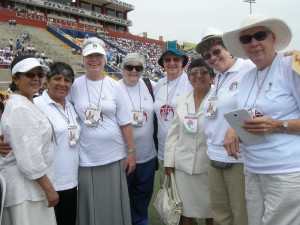 CHIMBOTE, PERU – Three priests who were martyred during an attempt by guerrillas to overthrow the government of Peru in 1991 were officially honored by the Diocese of Chimbote from December 4 through 6. The climax of the celebration was the beatification Mass in the presence of more than 30,000 faithful, including Dominican Sisters of Peace Thoma Swanson, Susan Leslie, Manuela Crisologo Gonzalez and Gemma Doll.

Srs. Manuela Crisologo Gonzalez and Susan Leslie are missionaries in Chimbote and were members of the Chimbote diocesan social action delegation, which planned some of the events leading to the beatification.

“We knew it was important not to lose sight of the political and social context that led to the assassination of these three missionaries and tens of thousands more during the 20 years that the Shining Path guerrillas terrorized Peru,” Sr. Susan said. “Looking at these realities through the eyes of gospel-faith and the social doctrine of the church helped us all, not so much to make sense of the violence, but rather to grow in our sense of solidarity and commitment. For me, it has been a tremendous opportunity to listen to the people who experienced this terrible reality first-hand, to allow my heart to be touched by their painful and faith-filled memories, and to help others to remember their own history – para que no se repita (so that it not be repeated).”

The three priests, Zbigniew Strzalkowski, Michal Tomaszek and Alessandro Dordi, died at the hands of the Sendero Luminoso (Shining Path) guerrilla movement. During the takeover attempt, the guerrillas accused the Church of supporting the “Yankee imperialist” Caritas and weakening the people’s revolutionary potential by encouraging religion. They targeted priests, pastoral workers and ordinary Christians working to relieve the suffering of the poor. 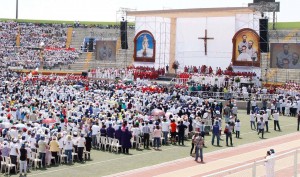 Sendero Luminoso threatened to kill a priest a week in the Chimbote Diocese the summer of 1991. On August 9, two Polish Conventual Franciscans, Frs. Strzalkowski and Tomaszek, were kidnapped and murdered. They had been working in the mountain parish of Pariacoto for less than two years.

Sr. Mary Ann Connolly, OP, a Dominican Sister of Peace and a missionary there at the time, remembered the two young priests as quickly learning the language and making themselves one with the people of their parish. “They worked to improve lives both spiritually and materially,” Sr. Mary Ann said.

She remembers that the Sisters received the news of the murders on the same weekend they were preparing to celebrate 25 years of missionary presence in Chimbote. “The celebratory Mass took place as planned but also became a celebration of the life and martyrdom of the two Franciscans,” Sr. Mary Ann said. “The beatification of these men recognizes the role of the Church at the side of the people. They were killed because they were servants of the people in every way that supported human dignity.”

In a letter to his family he wrote, “The hope that we preach to the poor is that they will find their own dignity and be the agents of their own liberation. The church is privileged to walk among the poor.”

Sr. Thoma remembered the day she traveled with Fr. Sandro to a chapel where she was painting a fresco. “We saw writing on a wall – ‘Yanqui, Perú será tu tumba’ (Yankee, Peru will be your tomb),” she said. “Sandro knew he would be the next to die, but he remained with his people.”

“I was deeply touched during the beatification celebration at Sandro’s parish with the Bishop of Bergamo (Italy), many bishops, priests, religious and the people,” said Sr. Gemma Doll. “Praying right behind his family, I could feel the mix of sentiments – pride for Father Allessandro’s holy example and pain at the loss of a beloved brother and uncle. I was also touched to see that every photo of Father Allessandro wearing vestments showed him with a stole from our Sr. Annunciata Chen (also a Chimbote missionary), a sign of the tremendous missionary effort of our Sisters.”

“The terrorists wanted to destroy them forever but for the Church today they are martyrs of faith and witnesses of hope,” said Fr. Juan Roger Rodriguez, president of the Chimbote Diocesan Committee for Beatification.

4 responses to “Dominican Sisters of Peace Ministered with Chimbote Martyrs”