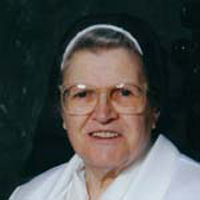 She was born on June 27, 1923, the daughter of Joseph and Elizabeth Stalter. She entered the Sisters of St. Dominic of Akron, OH, (now Dominican Sisters of Peace) in 1946 and professed her first vows in 1948. Sr. Francine earned a Bachelor of Science degree in Education from St. John College (Cleveland, OH) in 1958 and a Master of Science degree in Library Science from Case Western Reserve University, (Cleveland, OH) in 1978.

Her teaching career, mainly in the primary grades, began in 1948 in Youngstown, OH, and continued in Alliance and Wooster, OH, and at Our Lady of the Elms Preschool (Akron, OH). Sr. Francine worked as medical librarian at St. Thomas Hospital (Akron, OH), and librarian at Central Catholic High School (Cleveland, OH). One of her summer missions was spent teaching religion, crafts and music to Native American children in Zuni, NM. When she moved to the Akron Motherhouse, she ministered in the community library.

Her family meant much to her; she was the connecting force, keeping in touch with them. Sr. Francine liked to be observant and quietly help others in need without anyone else knowing about it.

In her reflection at the funeral Mass, Sr. Mary Ann Wiesemann-Mills, OP, said:

I remember a news story a few years ago about an Australian couple whose twins were born prematurely. Emily was tiny but alive and fully formed. Jamie, however, was pronounced dead after resuscitation efforts failed.

The doctor asked the parents if they wanted to have some time with their deceased son, and they said yes. Kate, his mother, placed the baby skin to skin against her heart. Both she and David, his father, talked to him and spoke to him of the future they hoped they would have with him. At some point, Jamie began to move. The doctor told them not to be too hopeful; the baby’s movements were probably just reflex reactions.

The parents coddled their son for two more hours. Near the end of that time, he opened his eyes. An amazed nurse went to get the doctor. When the doctor entered the room, he found Jamie not only alive but nursing.

What a profound image of our God, who never gives up on us, who clasps us close to the divine heart and urges us to fuller and fuller life! God never leaves us.

The readings that Sr. Francine chose for her funeral reflect her experience with this God of great compassion:

Isaiah: Can a mother forget her infant? Even should she forget, I will never forget you.

1 Corinthians: For the trumpet will sound, the dead will be raised incorruptible, and we shall be changed.

Matthew: Blessed are you. Rejoice and be glad, for our reward will be great in heaven.

The readings speak of the fidelity of a loving God in whom we safely place our trust. Sr. Francine’s life indicates how much she took this message to heart.

I came to know her when she served as community librarian and I as promoter of the charism. She would stop in my office every day to ask how I was doing and if there was anything she could do to help. She was a great support as I was struggling to create a new role. We often spoke of Dominican life and mission, in which she strongly believed.

She was happy in all the places where she was sent to teach. However, she loved most her ministry as librarian at St. Thomas Hospital and was sad when the hospital came under new ownership and she had to leave. She enjoyed assisting doctors, nurses and other staff in their work. A faithful Dominican, she spent many hours in prayer in service of others.

Indeed she lived close to God’s heart. Through her reaching out to others she extended God’s compassion. Through her love God drew others closer to God’s heart. We pray that, like Sr. Francine, we may allow God to hold us close to his heart and we in turn may be a blessing that draws others to the heart of God.

Sr. Francine is survived by her sisters Geraldine and Beth and many nieces, nephews, grandnieces and grandnephews.

The wake and funeral Mass were held at the Akron Motherhouse January 21 and 22, with burial following at Holy Cross Cemetery.

Memorials in honor of Sr. Francine may be submitted securely online or mailed to Dominican Sisters of Peace, 2320 Airport Dr, Columbus, OH 43219-1092.