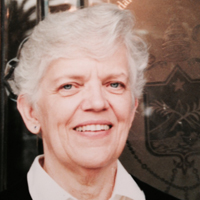 In 1948 she entered the Dominican Sisters of St. Mary’s, New Orleans, (now the Dominican Sisters of Peace). Sr. Dorothy earned a Bachelor of Science degree in Chemistry from St. Mary’s Dominican College (New Orleans, LA) and a Master of Science degree in Biochemistry/ Biology from Institutum Divi Thomae (Cincinnati, OH). She also earned a Master of Arts degree in Biblical Language and Literature from St. Louis University (St. Louis, MO). Known as a master teacher, she taught at St. Mary’s Dominican High School and St. Mary’s Dominican College in New Orleans. Later she served as adjunct professor and campus minister in Hammond, Lafayette and Thibodaux, LA, and Orlando, FL. She also served as vocation minister, archivist and historian for her congregation.

In her reflection at the funeral Sr. Mary Dominic Savio Estorge, OP, said:

How can one describe Sr. Dorothy? A romantic? Free spirited? Playful? Imaginative? Poetic? Patient? Dedicated? Creative? Loyal? Loving? Marching to a different drummer? Dorothy was certainly unique, and her gifts particularly equipped her for both the formal and informal ministries through which she “lived for the Lord” during her 86 years. Right now we are so conscious that she has also “died for the Lord.” It would be easy to limit our consideration to this ultimate death where she has “put on immortality.” However, through the years, Dorothy’s life was made up of innumerable “deaths” in the form of failures, hurts, disappointments and dreams deferred as well as the ill health that in these last years prevented her from doing the things she loved. Thus, while she was busy “living for the Lord,” she was also busy “dying for the Lord.” During the years I knew her, I never experienced Dorothy as a complainer. How often she “died for the Lord,” only she and God knew.

Dorothy’s first degrees were in chemistry and biochemistry. However, she would have preferred to teach sacred Scripture over the sciences. As it became more acceptable for women to study and teach Scripture, she earned a Master of Arts degree in Biblical Language and Literature and studied and shared Scripture with anyone who was interested. Like Jesus on the road to Emmaus, she opened the scriptures to others in classrooms, college student centers and through relationships in campus and vocation ministry.

Although Dorothy served as the congregation’s “official” vocation minister for only a few years, her ability to journey with others can be credited with fostering numerous religious vocations. Some of us in this chapel can thank her for asking the right question, planting the seed, offering the invitation that led us to seek admission into St. Mary’s Dominican Congregation and, more recently, into the Dominican Sisters of Peace. When Candidate Ana Gonzales was asked what brought her to this congregation, she responded without hesitation, “Dorothy Dawes!” She related the story of how Dorothy befriended her and helped her on her journey.

The same gifts that served Dorothy so well in vocation work also made her a good practitioner and director of the Progoff Intensive Journal Program. Who knows how many people she helped to better understanding of themselves and a deeper relationship with God through that medium?

Eventually, Dorothy’s singular combination of gifts coalesced to make her a quality archivist. She deeply loved the Dominican Sisters of St. Mary’s and never tired of learning more about our past. A dedicated researcher, she pursued leads, tracked down clues and answers to questions and organized information so that others could use it. Her archivist’s antennae were constantly alert for pertinent material.

Finally, after 86 years of “living for the Lord” through her living for others, Dorothy “died for the Lord.” At some later date her body will be brought to her beloved Rosaryville, but meanwhile, in her own way, she continues to help others by donating her body to science.

Many of Dorothy’s ministries could not be measured according to the world’s “Just Do It” standards. She could open knowledge to others, but they had to accept it and employ it in their lives. She could invite and nurture, but a person’s relationship with God remained between her/him and God. She could track, investigate, be alert, and organize information, but such work rarely makes the headlines. When Dorothy gives her account of her life to God, it will not be in terms of these things. It will be on God’s terms according to the scripture that governed her life: “It is love that I desire, not sacrifice, and knowledge of God rather than holocausts” (Hosea 6:6).

Sr. Dorothy is survived by her siblings Mary and James.

Sr. Dorothy donated her body to science; a Memorial Mass was held at the Dominican Sisters’ Motherhouse on January 29, 2016. Burial will follow at a later date.