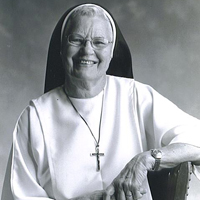 Sr. Mary Fidelis lived and worked at the Dominican Retreat House (Elkins Park, PA) for 62 years, transforming the 42-acre estate with landscaped gardens, heritage trees, flower beds and greenhouses. Thousands of retreatants brought home plants from her greenhouse as a remembrance of retreat along with words of encouragement from Sr. Fidelis. When the retreat house closed in 2006, Sr. Fidelis moved to Danville, PA, to the convent of the Sisters of Saints Cyril and Methodius, where she created beautiful flower and vegetable gardens.

In 2013 Sr. Fidelis moved to the Oxford Motherhouse and served as the horticulturist for the grounds there. A woman of great simplicity and commitment to Dominican life, Sr. Fidelis was deeply devoted to the beauty of the natural world, its healing properties, and the capacity of natural things to speak of God’s glory.

In her reflection at the funeral Mass, Dominican Sister of Peace Anne Lythgoe, OP, said:

“A sower went out to sow some seed.” Sr. Fidelis was a sower of seed, a pruner of vines, a cultivator of the Earth, a gatherer and generous giver who shared the bounty of her harvest. She was fiercely convinced of Earth’s sacredness long before anyone else was talking about ecology or eco-spirituality. She celebrated Earth Day every day, long before it came into our vocabulary and consciousness. The sacredness of the Earth, and the beauty and glory she found in it, was the heart of her understanding of God. Not surprising, since her convictions and experience were rooted in her family’s closeness to the Earth as farmers in Williamsport PA. Her parents: Paul and Mary, or Jennie and her siblings: Luella, Lea, Marie, Olive, Lawrence, Clarence, and Harry, all carried that simple, straight-forward way, and “Louise” was no different.

Sr. Fidelis, (sometimes “Fifi” to her friends) gave most of her religious life to the ministry of retreats at the Dominican Retreat House in Elkins Park, PA. Her role was not in the retreat house but on the grounds. Everyone who came on retreat experienced the grounds as holy ground, a spiritual garden in which they could experience God as powerfully as in the chapel. I dare say that the grounds were sacrament, too – an outward sign given by God to give grace. Sr. Fidelis was the sacramental minister.

Trees she planted are now 60 feet high. More than 500 rose bushes still bloom there because she carefully placed them in just the right locations. The ponds and stream, the formal gardens, the greenhouse and farm were her ministry. Who among us who can say that the word we have preached remains visible long after we have preached it? Fidelis leaves behind a lasting legacy that blooms anew each year.

As you heard the Gospel text, could you picture Sr. Fidelis, saying, “NO, don’t put the seed there! That’s thorny ground; the thorns will choke it.” Or, “NO, don’t waste the seeds on hard ground! That’s not the way to do it!” If you did not know better, you would think she was just plain argumentative, but the reality was she had a large and intense personality that impelled her to perfection, to doing things “the right way” and, more often than not, she was right.

She had the capacity to bring together disparate beautiful things in a variety of ways. Flowers and potted plants, along with ordinary objects, made their way into arrangements that were amazing. Ordinary things that you or I might pass by became works of art in her hands.

As large a personality as she was, many times within the life of the community she seemed to sometimes be hidden. She did not say much and often disappeared from community meetings, off in her now famous golf cart to take care of some urgent pruning or planting. Congregational gatherings of great importance were not a high priority for her. I think she left those matters in other hands. She would always end a conversation with me with, “Now, Sister, we have to depend on God. Jesus and his blessed Mother will help us.”

She was a strong, (some would say strong-willed) woman who could work circles around the men who worked for her. One of her “boys” said they worked really hard because none of them wanted to admit that a 70 year old nun could work harder than they did. They found in her a mentor, a friend, someone to share questions with and receive stern yet compassionate counsel. To this day, they speak of her with the greatest respect.

It seems to me that the hardest time in her life occurred when the congregation realized that the retreat ministry at Elkins Park was no longer sustainable. Too much deferred maintenance, changing needs of the women who came, pressures of staffing and aging buildings. In 2006, when the retreat house closed and the sisters moved to Danville, PA, to live with the community of the Sisters of Sts. Cyril and Methodius, Sr. Fidelis let go of what she thought of as her life’s work.

None of us will really know what it took for her to surrender that sacred ground to an unknown future. I wonder if her own spiritual storehouse of bearing witness to the natural cycle of death and new life, of seeing the changes of each season: winter to spring, summer to autumn, had given her the grace she needed to make this sacrifice.  I believe that when she was able to see this loss as God’s will, she could embrace it.

In Danville, Sr. Fidelis had an almost blank slate of possibility. The grounds, – though well cared for – needed something beautiful. She planted new gardens where there was nothing, using almost nothing. An old galvanized tub became a container for a rock garden dedicated to Mary. A tree stump suddenly bloomed. And that famous golf cart took her where she wanted to go.

Then in 2012, the congregation merged with the Dominican Sisters of Peace – another call to sow new seeds in a new place with golf cart in tow. Oxford was only the third ministry in her entire religious life, and she brought to it the same dedication to making the surroundings beautiful. It did not take long for her to have a greenhouse with the help of generous benefactors here.

In all three places of her ministry she attracted others who felt the draw of her personality and helped her in whatever work needed doing. She enjoyed faithful friendships all her life.

The letter to Timothy says it all: Preach the Word. Be ready in season and out of season. Sr. Fidelis, you were a preacher for all seasons. You were our sister, our friend, North Star to the boys, a true Dominican preacher whose Word of scripture was the earth itself.

May you now rest in God’s peace. And may we all receive a portion of your spirit.

Sr. Fidelis is survived by many nephews and nieces.

The Vigil Service and Funeral Mass were held at the Oxford Motherhouse on January 25 and 26, 2016, with burial in the Dominican Sisters Cemetery.