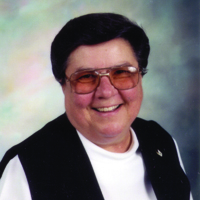 In 1955, Sr. Mary Hilary entered the Congregation of the Dominican Sisters of St. Mary, (New Orleans, LA) now the Dominican Sisters of Peace. She earned a Bachelor of Science in Music Education from Loyola University (New Orleans, LA) and a Master of Science in Music Education and Instrumental Music from Louisiana State University (Baton Rouge, LA).

From 1966 to 1969 Sr. Mary Hilary worked as an itinerant music teacher in archdiocesan schools in New Orleans. She became St. Mary Dominican High School’s band director in 1969, holding the position until the late 1980s. In 1971 Sr. M. Hilary became director of the Archdiocese of New Orleans band program, a position she held until her death. During a number of those years she also led music education efforts for the Diocese of Baton Rouge. She helped foster a love of music in thousands of young people through her teaching. Many of her students have given professional performances in various venues. “She was very fun-loving,” said Sr. Angeline Magro, OP. “She was a well-respected trumpet player who often would pick up her horn and play with her students.”

Some of Sr. M. Hilary’s former students shared fond memories of having her as their band director. She not only loved music herself, but had a gift for helping others love it as well. They also remembered her as someone who could humor in any situation.

Archbishop Gregory Aymond presided at the funeral Mass for Sr. M. Hilary. In his homily he remembered when St. John Paul II visited New Orleans in 1987. “Sr. Mary Hilary led the choir of 300 plus voices accompanied by the New Orleans Symphony. It was one of the highlights of her life,” he said.

Sr. M. Hilary is survived by her nieces, Colleen Charles and Kelly Hebert; nephew, Siguard Simpson, IV, as well as grandnieces and grandnephews.

The wake and funeral were held at Rosaryville Spirit Life Center (Ponchatoula, LA) on February 21 and 22, 2016, with burial following in Rosaryville Cemetery.