CHIMBOTE, Perú – On July 27, 1966, four Dominican Sisters of St. Mary of the Springs (now Dominican Sisters of Peace) boarded a cargo ship in New York City for the 15-day journey to the Pacific coast of Perú. Srs. Kateri McCaffrey, Catherine Allen, Edwina Devlin and Dorothy Lemon arrived at the port of Salaverry, about an hour north of Chimbote, where they were welcomed by the Dominican Friars of the Province of St. Joseph and transported to Chimbote. On that day, they began what would become a 50-year journey of walking with the people of Perú. 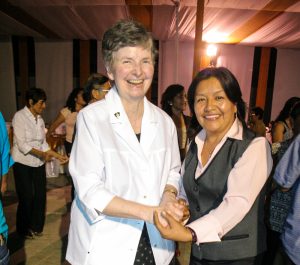 On April 29, 2016, (the feast of St. Catherine of Siena) in the parish church of San Jose Obrero, Bishop Angel Francisco Simon Piorno, bishop of the Diocese of Chimbote, presided over Mass in celebration of the Golden Jubilee of the Sisters’ presence in Chimbote. He was joined by diocesan priests and members of the Dominican Province of St. John the Baptist. Srs. Manuela Crisólogo Gonzalez and Susan Leslie, both of whom minister in Chimbote, and Srs. Mary Ann Connolly, Germaine Conroy, Catherine Malya Chen and Therese Leckert, who had ministered in Peru, were among those in attendance. Individuals representing some of the groups with whom the Sisters have worked over the years assumed various liturgical roles. Also in attendance were Dominican Sisters from across the country: Chimbote (Dominican Sisters of Grand Rapids); Lima, La Oroya, and Jarpa (Dominican Sisters of Springfield); San Juan de Lurigancho (Tucuman, Argentina). Dominican Friars came from Chimbote, Lima and Arequipa. A total of about 300 people attended the celebration.

During the offertory of the Mass, Sr. Elizabeth Castro Cruz, a Peruvian Dominican Sister of Springfield, danced down the aisle to Andean instrumental music. With a large bowl of incense she incensed the church, the congregation, the clergy and the altar.

Following the liturgical celebration, the attendees continued the festivities with a party. The Dominican Youth Movement and the Missionaries of St. Thomas Aquinas (both groups from the Dominican parish in Chimbote) performed various artistic numbers. Members of the Dominican Family from the Chimbote parish sang the Order’s official 800th Anniversary hymn accompanied by movements expressing the words.

View all photos from the event!

See the video of the Peru Celebration

One response to “50 Years of Presence in Chimbote, Perú”