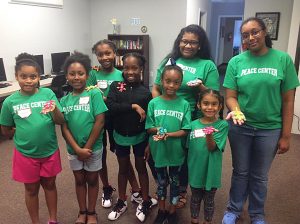 New Orleans, LA – This year, despite a sizzling hot June, the Peace Center hosted the second annual Peace Camp for 19 children, ages 7-10, who would not have been able to have a camp experience because of economic circumstances.

Thirteen boys participated from June 6-10 and six girls enjoyed the camp from June 20-24. The children traveled to Rosaryville Spirit Life Center in Ponchatoula, LA, a ministry of the Dominican Sisters of Peace, where they experienced canoe rides, the archery range and the wonderful swimming pool. The campers enjoyed a delicious, healthy lunch each day. The Sisters also took all the campers to Rock ‘n Bowl, New Orleans; each week there was at least one camper who had never bowled before and also campers who were quite experienced.

A highlight was the trip to the stables of the New Orleans Mounted Police. Campers toured the stable, brushed and fed the horses and had the opportunity to ride the horses. 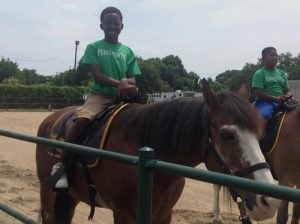 After the stable visit, the campers went to City Park in New Orleans for lunch and enjoyed 18 holes of City Putt. For non-golfers, it was an arduous experience, not improved by the incredible heat. The water fountains saved the day!

On the last day of each week, campers traveled to Xavier University Art Village, where they watched a movie about the life of a Mardi Gras Indian. They also viewed some young students sewing beads on headdresses and other pieces of Indian outfits for Mardi Gras. Earlier in the week, the boys had also heard a presentation from a Mardi Gras Indian chief, who encouraged them to become the best they could be. The Chief told them they could be whatever they wanted to be, and knowledge would be the key.

The Chief’s message to the girls, besides the need for knowledge, was “respect yourself,” a very important message for young Black women. The girls were also able to sculpt clay during their visit to the Art Village. They created many bowls, flowers, an owl, and even a replica of a King Tut mask. Once the pieces are fired, the girls will be able to pick them up at the Peace Center.

On the last day of camp each camper was asked to write his/her answer to the open-ended sentence: “I will be a Peace Maker by….” Their answers were posted on the front windows of the Center. Some of the responses were: “…being kind and helpful, being generous, inspiring others, helping Senior Citizens and stopping violence, being peaceful and treating others like I want to be treated, and not laughing at anyone.” One grandmother was so moved by her grandson’s response that she cried.

The camp was made possible through a grant from Catholic Health Initiatives. Dominican Sisters of Peace Suzanne Brauer, Pat Thomas and Ceal Warner, along with volunteer counselors, accompanied the campers. The Second Harvest Food Bank provided breakfast each morning and snacks each afternoon. Photos of the campers clearly show their enjoyment.