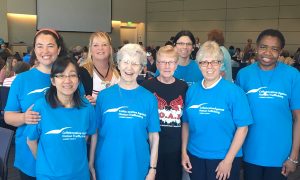 As Cleveland, Ohio prepares to welcome thousands of attendees to the Republican National Convention (RNC), the Dominican Sisters of Peace, in collaboration with the Cleveland Collaborative against Human Trafficking, actively supported efforts to prevent sexual exploitation and rescue victims of human trafficking during the Second S.O.A.P Up the R.N.C.

The event, led by S.O.A.P. (Save Our Adolescents from Prostitution), hosted an informative seminar regarding sex trafficking and the heart breaking testimony of sex trafficking survivor and S.O.A.P.’s founder Teresa Flores.

“This was one of the biggest events for our organization,” said Flores.  “We traveled to over 300 different hotels in Northeast Ohio bringing about awareness to the hotel staff and providing an escape route for potential victims and runaways that come through.  During the RNC, we expect the demand of trafficking to increase exponentially due to the fact that politicians remain among the top three perpetrators of trafficking; police officers and clergymen being the other two.”

OP Peace Sisters and Associates from the Columbus and Akron regions contributed by labeling and packing over 4,000 bars of soap.  Those who joined the S.O.A.P. UP the RNC event also assisted in canvasing 300 hotels across Northeast Ohio. The Sisters and Associates at the S.O.A.P  UP event were among 325 volunteers that assisted in the canvasing of hotels and created awareness of missing youth in the Ohio area.  Flores indicated that the Cleveland event hosted the most volunteers since the inception of the organization.

The Dominican Sisters of Peace adopted a corporate stance to end human trafficking proclaiming the mission to be a prophetic voice in solidarity with the poor, marginalized, and oppressed. 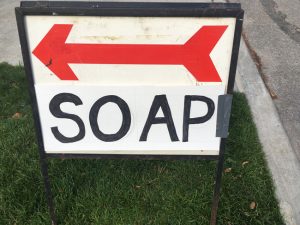 “Our role with events hosted by S.O.A.P. allow us to embody our corporate stance against human trafficking and actively educate, as well as raise awareness regarding an issue that is destroying lives and our community,” said Sr. Nadine Buchanan, OP.  “Our sisters and associates were able to create awareness about missing children in our area who can be victims to human and sex trafficking, distributed about 200 bars of soap to each hotel and equipped hotel administrators with tools to help combat sex trafficking.”

S.O.A.P. was founded by author, advocate and survivor, Theresa Flores. On her worst night, after being auctioned off to nearly two dozen men in an inner city Detroit motel, Theresa recalled the only item that would have reached out to her, a bar of soap.  With that in mind, she created S.O.A.P. to help reach out to other victims.

S.O.A.P. National travels all over the U.S. to hold outreaches during large events and partner with local organizations like the Dominican Sisters of Peace to distribute millions of bars of soap wrapped with a red band that gives the National Human Trafficking Hotline number 1 (888) 3737-888 and resources to high-risk motels.