The night of the seventh and final game of the NBA Championships this year, I watched the short video that immediately preceded the game.  The video ended with the words – Believe, Believe, Believe.  As much as I wanted the Cavaliers to win, I questioned, does it really come down to believing?  But at halftime, I found myself saying the words, believe, believe, believe.  Now I’m not saying that Cleveland players and fans believed more than Golden State players and fans, but what stays with me is the word and action – believe.

Recently several of our Dominican Sisters of Peace, and students from Albertus Magnus College and Ohio Dominican University, led by Sister Gene Poore, traveled to Jamaica to spend some time with the children in two summer programs.  Sometimes when I would begin to feel overwhelmed by the sights, sounds, and disparities of the lifestyles I was seeing compared to my own, I found myself going back to the word – believe.  Sister Gene has been building relationships there since 1992 and you could see the excitement in her as she greeted her Jamaican friends and as 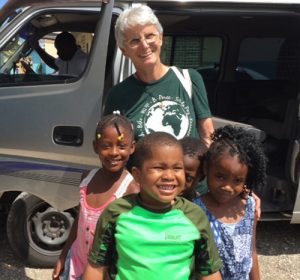 Ironically, the priest at the Sunday liturgy in Jamaica gave three actions as part of believing – believe, let go of anything holding you back, and take the next step.   In the Gospel reading this week, which tells the story of Jesus calming the sea, he reminds us, “Take courage, it is I; do not be afraid.”  Believe, let go, and keep walking.  I find myself praying for this courage for myself and for all of us.  What does it mean for you to believe?  I would be interested in hearing your thoughts.

10 responses to “Cleveland Cavs Revisited – What Does It Mean for You to Believe?”