Getting ready to celebrate being 102 years old might not be that big a deal to some people, after all, according to CBS News, the number of Americans living beyond their 100th birthday has been climbing steadily over the last 15 years.

But when you hear the story of Dominican Sister of Peace Edwina Devlin, OP, you wonder how she remains so vibrant and energized as she approaches the 102 mark. Even though she is legally blind, Sr. Edwina takes regular walks down the hall to visit other residents, using a walker that happened to be outside her room one day when she was feeling a little wobbly.

Sr. Edwina attributes her long life to living independently. “I have always been very independent; maybe it is time to mend my ways,” she said with a bit of a grin. Being legally blind does not stop her from enjoying music and books. Three times a week someone reads aloud to her for an hour. She is currently enjoying a book of anecdotes about Irish immigrants to Ohio.

“Whatever God wants, I want”

What’s her approach to life? “Whatever God wants, I want,” said Sr. Edwina. “I have always put my trust in the Lord, and I am always happy. I don’t mind staying alive. I have this wonderful relationship with God. First thing in the morning, while I am still in bed, I look at the cross, and then I start my day.”

She plans to celebrate on September 18 with other residents where she resides at Mohun Health Care Center, a skilled nursing facility in Columbus, OH, sponsored by her congregation.

Growing up with extended family

Her life story begins in Yakima, Washington, where she was born in 1914. World War I was raging in Europe, Pope Benedict XV was in the Vatican, and a gallon of gas cost 12 cents. Her parents had moved to Yakima from Steubenville, Ohio, so her father could find work. Her mother died when Evelyn was only two. Her three older siblings were placed in boarding schools, but her father needed care for his youngest child. She lived with a neighbor for three years. Her grandparents brought her back to Ohio when she was five.

Reflecting on her prayer life, Sr. Edwina smiled. “My favorite way to pray is just to be quiet and let thoughts come and go. The distractions I brush away. I love to pray the Rosary, too. Eucharist and the daily Scripture readings are important. We have a wonderful chaplain here, and I enjoy his homilies.”

Learning on the Job 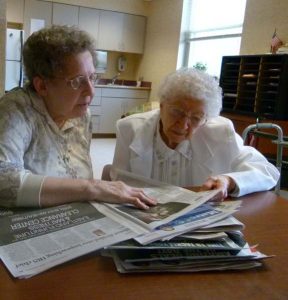 “I was totally surprised when I was sent to Braddock, PA, to teach high school English, biology, algebra and geometry!” Sr. Edwina recalled. “English, yes. But I hadn’t even had a course in biology and only the basics in algebra and geometry. Sr. Hilary told me to go to the fish store and buy guppies and she would show me how to use them to teach the reproductive system. It worked somehow.”

After teaching for 20 years, Sr. Edwina volunteered for the mission that was being opened in Peru. She quickly found that she had no ear for languages so, creatively, she taught English to adults who wanted to learn it. Among her students were doctors, nurses, professors and other professionals, for whom English was an asset.