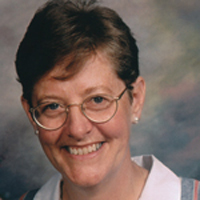 She earned a Bachelor of Science in Mathematics from the College of St. Mary of the Springs (now Ohio Dominican University) in Columbus, OH, and a Master of Science in Mathematics from the University of Notre Dame in South Bend, IN. Sr. Peggy studied Spanish at Connecticut State College and the Cathedral College Language Institute of New York. She taught math in schools in Connecticut, New York, Pennsylvania and Ohio as well as at the Colegio La Piedad in Puerto Rico.

In1987-8 she participated in the Dominican Formation Program in Rome, Italy.  Her facility with Spanish and her missionary spirit found expression in Chimbote, Peru from 1988-95 where she served as Formation Director.  In addition while in Peru, she taught mathematics at the Christian Brothers High School near Lima, worked with candidates, and planned retreat weekends.

Throughout her life Sr. Peggy demonstrated a passion for justice, serving at one time as Coordinator of the Parish Social Ministry Office of Urban Affairs in New Haven, CT after her return from Peru.  She was elected to the Congregational Leadership Team in 2002 and served until 2009.

In her final years in ministry she was Co-Director of Centro Santa Catalina in Juarez, Mexico, followed by a year as tutor at Siena Learning Center in New Britain, CT.  In 2014 Sr. Peggy moved to Mohun Health Care Center in Columbus, OH.

“All who knew Sr. Peggy and cared for her could only rejoice that she was released from her final illness and could dance joyfully into the embrace of her ever-faithful God,” Sr. Ruth Caspar said.

In her reflection at the funeral Sr. Anne Kilbride said:

As Isaiah points out in the first reading, “God has provided for all peoples.” We gather today to rejoice that this God who wipes away all tears has released Peggy from her suffering and brought her home.

When I heard that Peggy had died, a flood of memories came to mind like the formation of a wordle, a word cloud – see if any of these connect with your memories of Peggy: her name, Helena, Peggy, Sause, or Sauce, Ceslaus; the giggle; the watery blue eyes, frightened no longer; writing notes and cards; Fair Haven, where the sun always shines; St. Mary’s High School; St. Mary of the Springs; Notre Dame University; Dominican Academy; Puerto Rico; Braddock; Peru; Office of Urban Affairs; El Paso and Juarez; Siena Learning Center; math, math, math; music, especially singing; Rome; formation; leadership; her family, father and mother, James and Helen, her sister Kathy, brother-in-law Bill and nephews Bill, Scott, Kevin and their families; and all of us gathered here: sisters, associates, co-workers, friends.

I also recalled an image from today’s Gospel – the story of the bent woman as told by Luke. I remembered Sr. Thoma’s work of art, depicting the changes in this woman.  In the print you see the woman as her infirmity progresses. It is like looking at a reel of film, showing the gradual suffering of this woman.  At one point she becomes so bent she must use a staff to support herself.

Although we see the woman’s bent body, we realize that, even though she suffers, she is never broken. She quietly keeps looking for Jesus, without a word, much like Peggy who had so many words she could no longer share with us.  What is most remarkable about this woman is the expressions on her face as she seeks the healing of Jesus, what our second reading from Corinthians describes as the mystery, “All of us will be changed in an instant, in the twinkling of an eye, at the sound of the last trumpet.”  What is most memorable in the reel of pictures is the expressions on the woman’s face – wonder, questioning, pleading, smiling, and finally, in the center picture, after Jesus heals her, we see joy – and she praised God.  I firmly believe this is what happened to Peggy on Wednesday – she saw joy once again and she praised God.

As many of us know Peggy found great joy in music.  Singing was one of the last ways she could express herself in her illness.  When I think of Peggy, I recall two songs. First, “The Bells of St. Mary’s,” which she sang during high school and later as a teacher at St. Mary’s.  These years in high school were joyful to Peggy and introduced her to the Dominican life that she would live for the next 50+ years. Today, these bells ring out especially for Peggy. The other song is the Dominican Magnificat.  Peggy introduced this Irish Dominican version of the Magnificat to many of us.  This prayer of praise to God brought together the faith journey of Mary and her journey as a Dominican.  To Praise – certainly Peggy by her life, ministry and suffering gave praise to God as God’s servant and chosen one.  To Bless – Peggy brought many blessings to the people of God through her faith from which she found her strength.  To Preach – Peggy brought the word of God to others through her life and many ministries, open and accepting of the plan God had for her.

And so today we gather here in gratitude for Peggy’s life among us in the many ways she showed us what it is to be faithful.  We join her today, not as the “bent woman” but the woman standing tall, arms raised up, singing the Dominican Magnificat.  And like our woman in Luke’s gospel, she praised God, she Praises God!

Sr. Peggy was preceded in death by her parents, James and Helen Fryer Sause. She is survived by her sister, Kathleen Morris, and three nephews.

A Vigil of Remembrance and the Mass of Christian Burial were held at the Columbus Motherhouse on October 28 and 29. Burial followed at St. Joseph Cemetery.