When the state, in our names and with our taxes, ends a human life despite having non-lethal alternatives, it suggests that society can overcome violence with violence. The use of the death penalty ought to be abandoned not only for what it does to those who are executed, but for what it does to all of society.
-USCCB, A Culture of Life and the Penalty of Death

Recently, I had the opportunity to hear Shane Claiborne speak. Shane is known widely for his life of simplicity, commitment to Jesus and social justice, his passionate speaking ability, and his work to abolish the death penalty.

He spoke at University Baptist Church in Columbus, Ohio and addressed the many legal and moral objections to the death penalty. Shane posed the question, “Is anybody beyond redemption?” 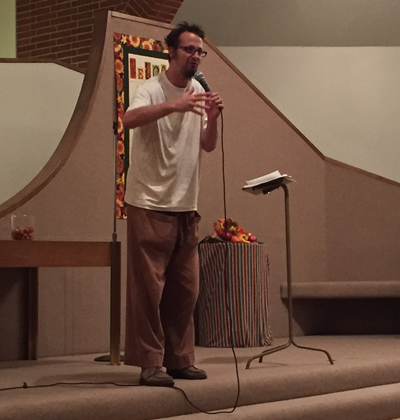 Throughout the Gospels, rather than retaliation, Jesus offered nonviolence and mercy: “Let the one among you who is without sin be the first to throw a stone at her.” (John 8:7) In the case of the woman who had been caught in adultery, Jesus was the only one with the right to throw a stone, yet instead, he met her with mercy.

The death penalty is retaliation in its most extreme sense which only perpetuates the cycle of violence and further marginalizes minorities, the poor, and disproportionately affects African Americans. Shane explained that in a system where individuals are often far better off being rich and guilty than poor and innocent, our criminal justice system is in need of much reform.

Respect for all life is found woven throughout our faith, from the Ten Commandments and Jesus’ teaching of peaceful nonviolence, to our Catholic Social Teaching. Respecting the life and dignity of each human person is central to our lives of peace.

The United States is the only Westernized Country that executes its citizens. We pray for those on death row, those who carry out the executions, and for the families of victims of violence. May we advocate for life for all, even those who commit terrible crimes. Jesus, remember me, when you come into your kingdom.

For more information about the death penalty, see this fact sheet.

3 responses to “Healing Our Society by Ending the Death Penalty”