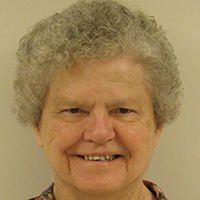 In 1973, Sister served at McCook Hospital (McCook, NE) in the finance department and later as Office Manager. During that same time, she was the Western Regional Treasurer. In 1978, she ministered as Treasurer at St. Catharine College, St. Catharine, KY. She returned to Nebraska in 1979 to minister at St. Joseph Hospital in Omaha, NE, as accountant, Medicare analyst and Medicare biller.

In 1989, Sr. Ruth Anne moved to the St. Catharine Motherhouse, St. Catharine, KY, and worked in the Finance Department until 2006. In October 2016, she moved to Sansbury Care Center where she began a ministry of prayer and presence.

Sr. Marie Jeanne Surrette recalled that Sr. Ruth Anne was her assistant bookkeeper in the Finance Department of the former Kentucky Dominican Congregation and always did her work with meticulous attention to detail. She referred to herself as “Ruth the Shredder” because she assisted the leadership team by shredding documents for them.

“Everyone knew which football team she rooted for – the University of Nebraska Cornhuskers!” recalled Sr. Rita Carr. “Whenever there was a Saturday game, she always wore red and urged every other Sister from Nebraska to do the same.”

Sr. Paschala Noonan remembered that Sr. Ruth Anne, upon her retirement from the hospital in McCook, NE, developed a ministry to the homebound. She created a newsletter that included jokes and information and sent it to about 35 homebound persons.

In her reflection at the funeral, Sr. Charlene Vogl offered the following reflection:

In today’s readings we hear the words “trust, faithfulness, courage and fulfillment” – Advent and Christmas words. Advent called us to trust in God’s promises. We remembered our ancestors in faith who continued to believe in God’s promises and modeled the courage it takes to continue believing in spite of fears, doubts, and even failings. Finally, fulfillment comes when Christmas erupts in the words of the Hallelujah Chorus. Jesus Christ, God-man, Savior, Counselor and Wonderworker, shall reign forever and ever! Sr. Ruth Anne died in Advent and is being buried in the Christmas season. These Advent/Christmas words summarize her life.

“Those who have put their trust in God will understand the truth of God’s ways.” Sr. Ruth Anne had a card by her bedside which said simply: “Dear Jesus, I have a problem…Signed: It’s me.” (Me with a small m.) Then a space, and the answer continues: “Dear Child, I have the answer…Signed: It’s Me.” (Me with a capital m.)

Sr. Ruth Anne had God’s listening ear. God was her fortress and her refuge from her earliest years.

“So we are always full of courage. For our life is a matter of faith not of sight.” Ruth Anne and I lived together four different times. I always found her welcoming, helpful, and upbeat in spite of her hearing disability. I knew her parents, and she knew mine. Her mother suffered blindness from diabetes. She had an acute memory; many times one would forget she was blind. It was through Ruth Anne and her mother that I learned the difficulties the deaf and blind face in a “hearing, seeing” world. It takes real courage to face such limitations hour after hour and day after day. Ruth Anne learned care and compassion from her father and creative coping from her mother. She never complained. More often there was humor. I learned what patience with and acceptance of limitations really meant.

Ruth Anne loved to tell and hear stories. Conversation is difficult when you can’t hear. However, she continued visiting with people via the ministry of letter writing, enclosing jokes to cheer the recipients.

Ruth Anne loved her family. That love as well as her love of history set the stage for 33 years of research into family history. She studied the Czech language and was able to visit Czechoslovakia and meet relatives in 1985 and 1988. In 1994, she returned a third time when Czechoslovakia was free of communist rule. She never tired of sharing stories of life under the communist government and reminding us of the freedom we enjoy as United States citizens.

In today’s Gospel we heard how Jesus healed the deaf-mute. “The people were amazed beyond bounds. He has done everything well. He makes the deaf hear, the blind see, and the mute speak.” One could say that Sr. Ruth Anne, always meticulous and precise, did all things well. Whatever she did, preparing lesson plans, documenting genealogy facts, working the numbers in the various finance departments, studying a car manual, she was accurate and thorough. She truly became the hands and heart of Jesus.

And so, Ruth Anne, your trust in God, your courage, your faithfulness, and love of life inspired us. Enjoy your family, enjoy your friends, and enjoy your God in glory and peace! We love you.

Sr. Ruth Anne is survived by her sister-in-law, Vera Rezek, and several nieces and nephews.

The wake and funeral were held December 28 and 29 at Sansbury Care Center Chapel, St. Catharine, KY. Burial of the cremains followed in the St. Catharine Motherhouse cemetery.