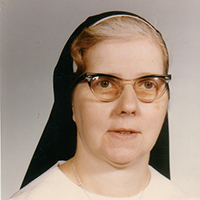 Sr. Doreen was one of five children born to Arthur and Elsie Peins Newton in Akron, OH. She entered the Sisters of St. Dominic of Akron, now Dominican Sisters of Peace, on January 6, 1944, and made religious profession on August 26, 1945. She earned a Bachelor of Science in Education from St. John College in Cleveland in 1956.

Sr. Doreen taught intermediate grades at St. Paul and St. Matthew, both in Akron; Immaculate Conception, Ravenna, OH; St. Dominic, Youngstown, OH; and St. Augustine, Barberton, OH. She worked as a teacher aide and tutored at Our Lady of the Elms Elementary School, Akron. After her retirement, she performed community service as receptionist and in the treasurer’s office in the Akron Motherhouse.

In her reflection at the funeral Sr. Diana Culbertson said:

When death occurs among us, we are all called to reflect on the meaning of our life together. For better or for worse, we have been given to one another, and it is through and with one another that we find the opportunity to love or to refuse to love. No one goes to God alone because no one can live life alone. (Even hermits need a food supply!)

Sr. Doreen lived among us as an innocent in one sense, but like many of us, weakened by a fragile body. She asked very little of us except whatever companionship we could offer and what little care she needed.

In his Letter to the Philippians, St. Paul reminds us that we must regard others as better than ourselves – a difficult saying. But there is no other way to live the Christian life. We do not know one another well enough – or deeply enough – to prefer ourselves to anyone. We can only hope for God’s mercy.

The Gospel image of the Good Shepherd reminds us to listen to the voice of Christ, but we must learn to listen. The shepherd of us all calls us each by name. He called Sr. Doreen by name – called her to Himself. And we trust that she is happy now and free and strong. We trust that she cares for us and prays for us.

Sr. Doreen is survived by several cousins, nieces, nephews, grandnieces and grandnephews. She was preceded in death by brothers, John and Robert, and sisters, Betty Etling and Dorothy Mitchell.

The wake and Mass of Christian Burial were held at the Dominican Sisters of Peace Akron Motherhouse (OH) January 2 and 3, 2017, with burial at Holy Cross Cemetery.

Donations in memory of Sr. Doreen may be submitted securely online or sent to Dominican Sisters of Peace, Office of Mission Advancement, 2320 Airport Drive, Columbus, OH 43219.