Nelson Mandela once said, “To deny any person their human rights is to challenge their very humanity.” The act of human trafficking denies the rights and dignity of each victim. January 11 is the National Human Trafficking Awareness Day and January 13 – 15 is the National Weekend of Prayer to End Slavery. Pope Francis has reminded the world that millions of people are still deprived of their freedoms and rights as they are forced to live in modern day slavery.

Today, as in the past, slavery is rooted in a notion of the human person which allows him or her to be treated as an object…. Whether by coercion or deception, or by physical or psychological duress, human persons created in the image and likeness of God are deprived of their freedom, sold and reduced to being the property of others. They are treated as means to an end. 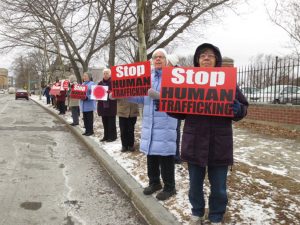 An Estimated 21 Million Victims are Trapped in Modern-Day SLAVERY

With the ability to sell a human’s body over and over through sexual exploitation or organ harvesting or to contract them out for endless amounts of forced labor, begging, or armed conflict, the business of human trafficking is more profitable than drug trafficking; human beings are continuously being sold over and over again as if they were a mere commodity. It is estimated that there are 21 million victims trapped in modern-day slavery.

These numbers explain the dire necessity of tackling the root causes and factors that lead to trafficking such as poverty, lack of equal opportunity, underdevelopment and inequality.

Pope Francis has stressed that we are tasked with “awakening consciences and promoting whatever steps are necessary for combating and uprooting the culture of enslavement.” Sr. Jean Schafer, SDS, the Editor of the Stop Trafficking! newsletter shares these actions we can do to bring an end to human trafficking:

Pressure the Federal Communication Commission to eliminate all pornography from the airways and entertainment.