Every year I write a Christmas letter – though it rarely gets out before the new year – and this year while recounting the year’s adventures, I had this thought: how many of us put an “even though,” at least in our musings if not the actual text, as we reflect on what the last year has brought? “Even though… I lost a brother-in-law …finances are tight …I’ve been overwhelmed by work …my arthritis has been acting up and slowing me down …I’m so upset by the terror and turmoil in the world …I find myself fearful and doubtful….”

We’re resolved to carry on

But starting with an implicit or explicit “even though” reveals something about us. And that is found in what – also implicitly or explicitly – follows: “even so” or “yet.” We’re resolved to  carry on, to keep praying and  hoping, to make the necessary adaptations, and not be defeated by the negatives in our lives. And to our surprise, we’re ok, doing all right, or a bit mysteriously, happy and/or at peace.

We Christians have a long heritage of this pattern. The psalmists and the prophets, over and over in vivid language and imagery lift their complaints  to God and recount the punishments being visited on their people, and in the genius of the psalmist-prophetic tradition, remind God of the divine power and mercy and past rescues from their tragedies or their foes. Inevitably, they conclude with a word of confidence that God will do as God always has done. Thus, the prophet Habbakuk says:

The fig tree has no buds, the vines bear no harvest, the olive crop fails, the orchards yield no food, the fold is bereft of its flock, and there are no cattle in the stalls. Even so, I shall exult in the Lord and rejoice in the God who saves me. (3:17-18)

Even so. Yet I will. 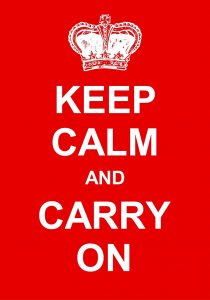 Even so. Yet I will. We step out into the coming year, saying a cautious “yes” to whatever life may be offering us, remembering God’s presence, grateful for the ways we have been upheld and supported and for the love of those surrounding us with whom we have just celebrated the coming of the Word Incarnate.

Somehow, by the grace of this God who has chosen (quite madly, says Catherine of Siena) to be smitten by and firmly entangled with creation and humanity, we will maintain hope. Somehow, we will live in this world of contradictions all around us, even within us, and we will continue to gather in prayer and supplication and preach God’s faithfulness to each other and in and to whatever worlds involve us. And we will offer whatever is within our capacity to give, even when we are sharing our neediness.

Even though this year past had its ups and downs, and we carry still some worry and pain, even so we cling to God, because God first embraces us. We step out on the word of God, offering each other solace and support, being Incarnation, doing Incarnation, as God-in-Christ wears our faces, reaches out with our hands, speaks tidings of peace with our limited vocabularies. The Word-made-flesh is at home here, and is not leaving anytime soon, but pursuing us and harassing us into living hope, and to kingdom come. Even though. Even so.

4 responses to “Even Though…Even So”