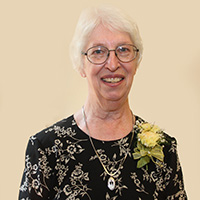 From 1968 until 2003 Sr. Ruth was on the faculty of Ohio Dominican University. During those years she took advantage of three sabbatical opportunities to pursue her special areas of interest and to publish many articles. Her sharing the fruits of her research went well beyond publications. Her participation as a fellow with the National Endowment for the Humanities in a summer seminar in Bioethics led to her appointment as Consultant for Biomedical Ethics at Mount Carmel Hospitals from 1983 to 1996, a position she held concurrently with her university position.

In 1992 Sr. Ruth became the first recipient of the Dominican Faculty Master Teacher award. Sr. Mary Andrew Matesich, ODU President, said of her: “You have been a model, not only through your excellent course design and creative teaching methodologies, but also in the very deep respect you have for each student’s own truth and the careful way you nurture its growth.”

The award gave her the time and resources she needed to design a course entitled “Perspectives on Truth in the Dominican Tradition” with St. Dominic, St. Thomas Aquinas, St. Catherine of Siena, Fra Angelico and Bartolomé de las Casas as examples. She taught the course and then led a tour of European sites connected to these figures – Paris, Siena, Florence and Rome.

The Post Vatican II renewal of religious life included the House of Prayer Movement, and from 1970 to 1973 Ruth proposed, designed and implemented summer programs in prayer and spirituality for the members of her congregation.

One of Ruth’s many contributions to Dominican Spirituality was her participation in the Committee that produced Dominican Praise, now used by many Dominican congregations in the US. She considered the project “a way to renew our own love of the Liturgy of the Hours.” She also worked tirelessly with the committee that wrote the Constitution now used by the Dominican Sisters of Peace. She was always willing to give these special projects her best energy.

In her preaching at the funeral Sr. Joan Franks said:

The American philosopher Charles Sanders Peirce once wrote: “The Spirit in which philosophy ought to be studied is the spirit in which every branch of science ought to be studied; namely the spirit of joy in learning ourselves and in making others acquainted with the glories of God.”  His words surely apply to Ruth, as Dominican, as philosopher, as teacher and mentor, as Sister and friend. She was a contemplative woman, a scholar, keenly insightful, and a woman who knew deeply the power and mystery of prayer.

These attributes led her early in her career at Ohio Dominican to a fascination with the human propensity to play, particularly the signals of transcendence disclosed in this activity, the suspension of time and space, for example. She published several articles on the topic, seeing the play-experience as an intuitive response to the universe as object of hope. She writes: “The ecstatic impulse to play dares to hold out as an object of hope a transcendent order characterized by peace, liberation and ecstatic joy.” We see this, too, in the mandalas she created over the years, for these established for her a sacred space, a play space, where her prayer flourished. For the pure play of Ruth’s mind always alighted on the God for whom she thirsted.

This brings us to the readings Ruth chose for her funeral liturgy. Isaiah evokes her love for feasting. Good food, good company, good conversation brought us all into her heart where we found her first and best feasting to be on the Word of God.

This feasting was revealed, too, in Ruth’s love of language, of poetry: can we even think of her without remembering her passion for words, her mastery of words? Paul writes, “I believed; therefore, I spoke.” The poetry of her speech and writing, the clarity of her explanations inspired both her students and her colleagues. But her captivation by words was most essentially a captivation by the Word, the Word of faith. Her love affair with words was a love affair with Jesus, the Word of God made flesh.

All this reveals Ruth as a Dominican, par excellence.

Many years ago Ruth, moved by her study of Aquinas’ five ways of demonstrating God’s existence, wrote a poem titled “Unproved Prover, playing on the Thomas’s “Unmoved Mover.” The final stanza reads:

The God of the Proofs is an abstract word
Whose meaning few discover.
(Must the God-Word come to earth unheard
And be the Unloved Lover?)
Unheard? Unloved? Not by Ruth.

In her reflection on TS Eliot’s repetition in “Little Gidding” of Julian of Norwich’s phrase, “All shall be well and all manner of thing shall be well,” what was clear to her was the communication of hope within the context of religious faith – a hope rooted in this universe, in time and space, that takes us to eternity.  Your hope is now realized, Ruth.  Play before the Lord.

Sr. Ruth was preceded in death by her parents, George and Anne Cannon Caspar, and her brother Philip. She is survived by her brothers George and Joseph, her sister Helen Quistorff, and nieces and nephews.

The Vigil of Remembrance and the Mass of Christian Burial were held on January 13 and 14 at the Dominican Sisters of Peace Columbus Motherhouse Chapel with burial in St. Joseph Cemetery.