Life’s most persistent and urgent question is: “What are you doing for others?” ~ Rev. Martin Luther King Jr.

Our nation celebrated the life and legacy of Rev. Martin Luther King, Jr., yesterday – I always like to use “Rev.” in front of his name as a reminder that everything he did was rooted in love.

For me, Martin Luther King, Jr., Day is a day of reflection. It is a day that I never want to come short in answering what he considered life’s most urgent question: What are you doing for others?

As a Christian, as a Dominican Associate, as a human being, I am compelled to serve others. Rev. King modeled for me that we are all interdependent and that as Christians we cannot be silent while injustice forces our sisters and brothers to the periphery. In all my studies of the life of Rev. King, I have concluded that he would agree that “justice is what love looks like in public” (Cornel West).

Our Dominican spirit calls us to exhibit love while promoting justice and creating environments of peace. Sometimes that can be difficult, but I find encouragement to keep moving forward in the words of Rev. King: “I refuse to accept the view that…the bright daybreak of peace and brotherhood can never become a reality…I believe that unarmed truth and unconditional love will have the final word.” 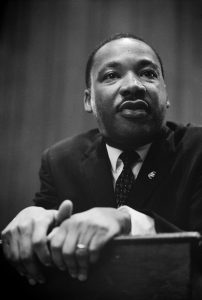 Everything that I know about Rev. King leads me to believe that his spirit was kindred to the Dominican spirit. He prayed for the guidance of the Holy Spirit. He studied and contemplated to stay in the will of God. He built intercultural community. He ministered to the marginalized.

A Stance of Nonviolence

Even his nonviolent movement was built on the love of God through Jesus Christ. He credited Jesus and Mahatma Gandhi with helping him develop a social and political stance of nonviolence. When he and others working in the Civil Rights Movement were beaten with batons and leather whips, knocked down by high-pressured water blasting from fire hoses, tear-gassed, bitten by police dogs, treated like they were less than human and called everything but children of God, he preached peace.

As a champion of social justice and human rights, Rev. King used the Gospel message to challenge a system that embraced what he called three economically, politically, and socially entrenched evils – racism, poverty and war. He made the ultimate sacrifice to stand for what he believed was right.

In the 50th Papal Message for the World Day of Peace, Pope Francis pointed to Rev. King as an example of a nonviolent peacemaker. He challenged us to become instruments of reconciliation and adopt nonviolence as a style of politics for peace.

In working to meet that challenge, the follow-up question for me is: Are you ready to engage in peacebuilding through active nonviolence to show that unity is more powerful than conflict?

Peace is not merely a distant goal that we seek, but a means by which we arrive at that goal. ~ Rev. Martin Luther King Jr.

4 responses to “What are you doing for others?”