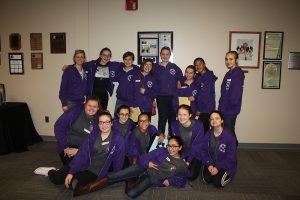 AKRON, OH – The District Power of the Pen Tournament was held on January 7 at Our Lady of the Elms School. The Elms middle school students were one of 15 schools that competed in the event. Coached by middle school teacher Lisa Walker, the seventh and eighth grade teams each placed third overall.

4 responses to “Elms Students Show that Words Have Power”

Caring for each other during this time of pandemic is a way to reconcile with God and our neighbors.