Intro by Sr. Amy McFrederick: I’m not a football fan and I had no intention to watch the Super bowl game last evening. But I was ok with having it on as I continued to read my book. Looking up every so often, I followed the score somewhat distractedly until after the half time show. It was only after the Patriots made their first touchdown, that I became engaged and watched with amazement as they fought their way back to tie the game, go into overtime, then actually win! What an example of not losing hope when things seem to be going south! What about us? How does our hope stand up to the daily challenges we meet?

One of my favorite programs is American Ninja Warriors in which athletes strive to overcome obstacles using their physical strength to win a large money prize. Many people come out to compete but very few make it to the end. They tackle things like the Giant Rolling Log where they catapult themselves in the air to grab a log that is floating above them, then grab a rope and swing to the next obstacle. The 14 foot Warp Wall requires they run as fast as possible up the 14 feet and go over the top. The Flying Squirrel, which is impossible to describe except to say it’s very, very hard. The Broken Bridge, which they must cross by leaping over widely spaced planks. In each segment, heading for the final test, the obstacles increase in difficulty. They train in every way possible but there is no rehearsal for the stage they are trying to conquer. The athletes climb, they run, they jump, they hold on with fingertips as they hang from one disk and swing toward another. Every muscle is at work. They try to stay focused on the task at hand all the while knowing the clock is ticking and they have very little time. When they miss, they land in the water, smile bravely, go home and start training for next year. 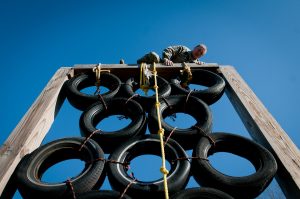 Doesn’t that sound a lot like our lives? Most of the things that take up our lives require focus, preparation, dedication, and determination to do our absolute best, like these for example: Leaping high for something new and then holding on for dear life – the Giant Rolling Log. That goal you keep trying to reach but seems to get farther away the harder you try – the 14 Foot Wall. The seemingly impossible task that requires all the strength your head, hands and feet can provide and yet is often too slippery to master – the Flying Squirrel. Then we make a mistake and fall in the water. There is no rehearsal for life either. There are the days when it just doesn’t seem worth it. Days when you want to curl up and quit.

Christ death is our hope

Why do the athletes keep coming back for more; for that matter, why do you? You do it because you, like them, have hope. “Hope springs eternal in the human breast” according to Alexander Pope. Within you is that hope and with it the thread of grace, which God has given you to help you pull yourself up, smile bravely and begin again. Christ lived among us to bring us hope. He died and rose to prove that there is reason to hope. There is an endless supply of hope but we must train ourselves to keep it alive. “Hope does not put us to shame, because God’s love has been poured out into our hearts through the Holy Spirit, who has been given to us” (Romans 5:5). Hope will allow us to do all that God requires of us in this life. When a Ninja Warrior achieves the ultimate and is declared the champion, he/she experiences a moment of pure joy. For us, that moment will come when our tasks are finished and we no longer have need of hope, but have finished the race and are at last with God.

4 responses to “Meeting the Challenge”