I added a new name to my list of Good Samaritans last week: Ian Grillot.

As I watched a television interview with the 24-year-old Kansas man – while he lay in a hospital bed wearing a neck brace and recovering from gunshot wounds to his hand and chest – his words warmed my heart: “I was just doing what anyone should’ve done for another human being.”

Anyone? I don’t know too many people who would stand up against hatred and take a bullet for a stranger. Do you?

Well, Ian Grillot did. According to news reports he is the man who intervened when a gunman opened fire on two men of Indian descent and of the Hindu faith, killing one and injuring the other, inside an Olathe, KS, sports bar. The gunman reportedly thought the two men were of Middle Eastern descent and made bigoted remarks to them (including “get out of my country”) before opening fire.

“Love thy neighbor as thyself” 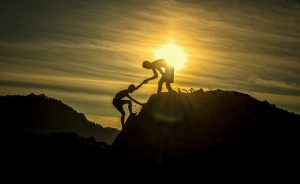 Ian Grillot rejected the notion of being a hero, but he can certainly be described as a compassionate person who selflessly helped others. He lived out the scriptural mandate to “love thy neighbor as thyself” and illustrated for us that everyone is really our neighbor.

I don’t know if Ian Grillot is a man of faith; but (whether he is or he isn’t), his actions elicited this question for me: How far are you willing to go to help someone who is in distress?

Many of us, who profess faith in Jesus Christ, talk the talk but are not willing to walk the walk when we see someone in a difficult situation. How can we close our ears or turn a blind eye when others have unmet needs that we are capable of meeting?

I’ve never been in a situation where I had to risk my life to assist another human being; but I believe that when God has blessed me with the resources to meet the unmet needs of others, it is my responsibility to help meet those needs as a way of sharing God’s love.

Typically, I have shared empathy, compassion, money, food, books, a smile, a listening ear, a shoulder to cry on, a hug, a ride, and my time and services. 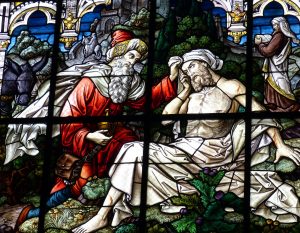 A group of psychologists who studied the “Good Samaritan” effect concluded that people are less likely to stop to help someone in a difficult situation if they are in a hurry.

If Ian Grillot can take a bullet, I know that I can sacrifice time and convenience to answer the call of someone in need.

I don’t know what went through Ian Grillot’s mind before he went to the aid of Alok Madasani, who was injured, and Srinivas Kuchibhotla, who was killed. But I wonder if he considered that he could be risking his life?

I wonder what goes through our minds before we make a decision about whether to help someone in need?

How we love people speaks volumes about our relationship with God. Our love for others must transcend the boundaries of geography, race, religion, socio-economic status, and convenience.

Let us stop and take a moment to pray for Ian Grillot; Alok Madasani; Srinivas Kuchibhotla; their families; and all of those who are affected by bigotry and violence.

Martin Luther King Jr.
(expounding on the parable of the “Good Samaritan” a day before his assassination in Memphis)

8 responses to “Loving Without Counting the Cost”