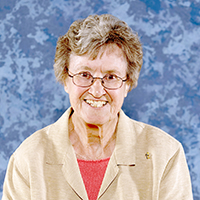 Dominican Sister of Peace Juliana D’Amato, OP (86), died at Mohun Health Care Center, Columbus, OH, on February 20, 2017. She was born in Matrice, in the province of Campobasso, Italy. When she was a young girl, her family moved to Youngstown, OH, where she met prejudice for the first time as a high school student. “Parts in plays, honors at graduation, etc. were not for students with ‘foreign names,’ and there were many of us,” she said. Many years later Juliana remembered spearheading a successful underground, anti-administration newsletter in response to the injustice she encountered.

In 1949 she began attending the College of St. Mary of the Springs (now Ohio Dominican University). By the end of her freshman year, she was convinced that what she wanted more than anything else was to teach. She wrote: “I decided that I could teach, wear the white habit, and dedicate myself to God – in that order.” She entered the Dominican Sisters of St. Mary of the Springs (now the Dominican Sisters of Peace) and was professed in 1952.

Sr. Juliana taught in elementary schools in Pennsylvania, New Mexico and Ohio. During that time, she completed the requirements for her undergraduate degree in art. After teaching art for a year at St. Mary High School in New Haven, CT, she earned a Master of Art in Italian at the Middlebury Graduate School of Italian at the University of Florence. She earned a Doctorate in Italian Literature at Yale University in New Haven, CT. From 1969 to 1971 Sr. Juliana taught at the Catholic University of America in Washington, DC. She then moved to Albertus Magnus College in New Haven, CT, where she remained for 25 years. For several summers she also taught Renaissance Art History and Italian at Providence College in Italy.

The words of Professor Bob Imholt, Chair of the Faculty Status Committee, perhaps best summarize what Sr. Juliana’s service meant to Albertus Magnus College. The Committee unanimously recommended that she be given the status of Professor Emerita, and he wrote: “Showing enormous respect for each individual student, she has been and continues to be a supportive and attentive faculty member and a model for us all. She is a superb scholar; a woman of remarkable talents, outstanding achievement, and unswerving integrity.”

Professor Susan Cole, an Albertus colleague and friend, affirmed even more strongly the qualities Bob Imholt noted. In a letter written after Sr. Juliana left Albertus, she lamented this loss saying: “You have always been to me a spiritual and intellectual model. The word integrity has no meaning to my mind without reference to you.”

The activities Sr. Juliana chose for her sabbatical in 1980 illustrate her values. She spent three months at the Catholic Worker House in New York City. In writing about the experience, Juliana noted: “A Catholic Worker leads a difficult life because there is little or no privacy. The work is never-ending; emergencies are common.” Yet her own philosophy is evident when she says: “The Workers do not think of their life as exceptional. They believe the Sermon on the Mount was not given to exceptional people. It was meant to be the norm, and the Corporal and Spiritual Works of Mercy are for all of us to practice in deed!”

She also spent sabbatical time doing research in Toronto, Georgetown, and Rome on the letters of St. Catherine of Siena. Devotion to the writings of Catherine and Dante were part of her love for Italian language, literature and culture, and a source of joy for those with whom she shared those treasures.

Before leaving Albertus Magnus College in 1996, Sr. Juliana attended St. Michael’s College in Winooski, VT, for graduate work in theology and pastoral ministry. Following this preparation, she served as pastoral minister at St. Margaret of Cortona Parish in Columbus, OH for eight years.

Sr. Juliana was preceded in death by her parents, Nicholas and Giulia Maria D’Amato, and her sisters, Mary Motosko and Nilde Wolf. She is survived by her sister, Vittoria D’Amato, many nieces and nephews, and their children.

The Vigil of Remembrance and the Mass of Christian Burial were held February 24 and 25 at the Dominican Sisters of Peace Columbus Motherhouse. Burial followed in St. Joseph’s Cemetery.