This past Sunday’s Gospel, “The Woman At the Well,” resounds with the call and mission of the Dominican vocation “because of the word of the woman!” I think a lifetime of study could never fully unearth the richness and meaning of the teachings found in this Gospel.

The story begins with Jesus at Jacob’s well in the wretched town of Samaria. The disciples have left for town and Jesus is alone…and waiting. A nameless woman approaches shouldering her water-jar. It’s high noon and we get the sense she’s weary, maybe weary with life.

At the well is a Jewish man who speaks to her and makes a request. This Jewish man asks for a drink of water. She’s shocked that he, a Jew speaks to her, a lowly Samaritan woman! “I thirst!” The words foreshadow those spoken from the cross. The woman is suspicious, why is he asking her for a drink. She fails to see his audacity reveals his love, his thirst for her – “if only you knew who is asking you.” Jesus then gains her attention telling her he would give her water, a living water that will “become in her a spring welling up to eternal life.”

The woman is hooked! “Sir, give me this water!” Jesus tests her authenticity. “Go call your husband and come back.” When she answers truthfully she has no husband, he tells her she’s had five and the one she’s with now is not her husband. She’s stunned! He knows everything about her, knows her brokenness. And…none of it matters to him. Her past is just that – her past. 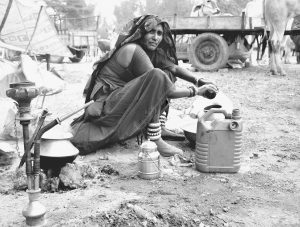 He calls her to a new life, a new future. She now recognizes the gift and the giver. Centuries have passed, yet each new generation of the Church still are in awe that it was to this lowly woman, Jesus unveiled the fulfillment of the Scriptures, the arrival of the messiah – “I am HE who is speaking to you.” Transformed, she leaves the water jar of her past at his feet and runs to announce the good news to her townsfolk. She invites them to “come and see” the same invitation Jesus extended to Andrew and John (John 1:39). They came. Why?

“because of the word of the woman.”

The season of Lent reminds us that Jesus waits for us as well. Like the nameless woman, the daily scriptures and sacraments coax us to begin anew by embracing our truth, leave our old water-jars behind, spread the joy of the good news and give witness to the encounter with the one called the “Anointed.”

As Dominicans, it seems only natural for us to hope and pray that at the end of the day, at least some of the townsfolk who have graced our lives will bear witness they were helped to believe

“because of the word of the woman.”