ACA vs AHCA – Our Gospel Mandate

Throughout Scripture, Jesus heals the sick, comforts the suffering, embraces children, reaches out to the marginalized, and continually encourages us to do the same. Pope Francis has reinforced Jesus’ words by explaining that “health care is not a consumer good but a universal right, so access to health services cannot be a privilege.”

With the recent battle between the Affordable Care Act (ACA, commonly referred to as Obamacare) and the American Health Care Act (cleverly and confusingly known as AHCA), our Gospel mandate to care for the poor and sick has become front page news. The current Administration has promised to fix the ACA by repealing it and replacing it, yet members of Congress on both sides of the aisle expressed concern after the Congressional Budget Office estimated that up to 24 million individuals could lose coverage under the new proposed AHCA.

Healthcare is a human right

As individuals of faith, we understand how critical healthcare is to keeping our communities healthy and safe and caring for the common good of all. Catholic Social Teaching pushes us to care for the vulnerable among us, and The Compendium of the Social Doctrine of the Church notes that healthcare is a human right along with food, housing, and work (166) and explains that the preferential option for the poor and vulnerable must include those without health care (182). 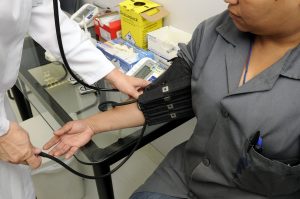 It was inspiring to see many communities, including our Dominican family, who recognized that these dangerous cuts to insurance and Medicaid would harm the vulnerable, and who then took a stand, spoke up, called Representatives, and expressed concern about the devastating effect this new legislation would have.

Through that perseverance, the AHCA failed to repeal Obamacare, and millions of Americans will continue to receive their healthcare. Yet there could be more hurdles ahead as House Republican leaders and the White House begin new negotiations to repeal the ACA.

April 7 is World Health Day. If your Representative pledged to vote no to the AHCA, take a moment to call to express your thanks and your support to continue upholding the importance of coverage and care. Find their local office number here, or call the Congressional Switchboard for their DC office at 202-224-3121.

Sample Script:
My name is __________. I’m a (Catholic Sister and/or constituent). I view access to health care as a moral issue. I had serious concerns about the impact the AHCA would have had on access to health care, particularly for the most vulnerable. The bill would have made insurance unaffordable for many Americans struggling to make ends meet, and many would have lost coverage. I believe that the AHCA was not the faithful way forward, and I am grateful that Representative ____ showed the courage to oppose it. Thanks you for listening to the concerns of so many in your district.

At sunset, all who had people sick with various diseases brought them to him. He laid his hands on each of them and cured them. (Luke 4:40)

One response to “…And They Were Cured”