Columbus, OH – “Honey, are you hungry?” These words are often heard by a teenage girl on the streets of Columbus, OH. She is dirty and hungry, and despite the fact that she will be with as many as 10 men today, she is alone and unloved. But to Sr. Nadine Buchanan, OP, this girl is an angel in disguise – and those simple words open a door to hope and love.

Sr. Nadine began her mission to the victims of human trafficking in Columbus, OH, in 2009. It was a way to, as she says, “put flesh” to one of her Congregation’s commitments: to promote justice for the marginalized, especially women and children. Over eight years, her ministry has moved from cooking meals with and for survivors, to the courtroom to help those in recovery, to the streets. Today, she works with women who are still in the grip of a life of sexual slavery.

“I started this part of my work with human trafficking about two years ago, when I offered to help my friend and mentor, April Thacker,” Sr. Nadine says. “April was trafficked for 15 years, and now works to help others survive and leave that life. She was taking food and personal items to women on the street during the holiday season. From the very first time I went out with April, I was taken by the sadness and suffering on their faces – and now, I can’t do enough for these women.”  END_OF_DOCUMENT_TOKEN_TO_BE_REPLACED

From Maryknoll Office for Global Concerns: Click here to urge President Trump to stay in the Paris Climate Agreement.

The Wendy’s Way: Treat people with respect, do the right thing, give something back.

That sounds like a great mission statement, perhaps a statement similar to something we would find in the Gospel. How wonderful it would be if all corporations operated in accordance with those principles! I’ve always enjoyed Wendy’s chicken sandwiches and Frosty desserts, and with a great catch-phrase like that, why wouldn’t I want to support their company? However, while Wendy’s proclaims social responsibility through their very catch-phrases, they leave much to be desired in how they treat those with whom they work.

Last week I had the opportunity to attend the Wendy’s Annual Shareholder Meeting in Dublin, Ohio. At this meeting, the executive officers spoke about finances and how Wendy’s is working to create joy and opportunity in food, family, and community. They explained plans for updating Wendy’s restaurants and continued outreach and marketing. 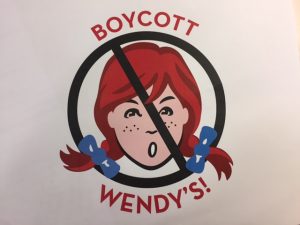 I, along with 26 other community and faith-based leaders, was in attendance to question Wendy’s on their practices and commitment (or lack of commitment) to farmworkers. We urged Wendy’s to join the Fair Food Program, a program established by the Coalition of Immokalee Workers, an internationally-recognized farmworker-led human rights organization. This program aims to protect farmworkers from human right abuses and conditions such as inhumane wages, labor camps, child labor, sexual violence, and modern-day slavery. However, instead of signing on to the Fair Food Program, Wendy’s has moved its tomato purchases from Florida to Mexico in order to avoid the Fair Food Program altogether. These abuses of farmworkers are just as horrific in Mexico and go unchecked.

According to their website, “the Coalition of Immokalee Workers’ (CIW) Fair Food Program is a unique partnership among farmers, farmworkers, and retail food companies that ensures humane wages and working conditions for the workers who pick fruits and vegetables on participating farms.”

The Fair Food Program has proven results in promoting the rights of farmworkers and ensuring they are protected at work and paid a fair wage. Already, numerous corporations (many of which are major competitors of Wendy’s) have signed on including Walmart, Chipotle, Burger King, Whole Foods, Trader Joe’s, Subway, Taco Bell, and McDonald’s.

At the shareholder meeting, the executive leadership quickly got frustrated and annoyed with our continued questions about Wendy’s refusal to join the Fair Food Program and refused to even engage in a conversation about it in a private meeting. They asserted that they did not care about the current Wendy’s boycott because they still had “a huge share of stomachs that love Wendy’s.” Eventually, the chairman cut us off and prevented us from asking any more questions about the Fair Food Program. After he adjourned the meeting, those of us in attendance on behalf of shareholders and the Coalition of Immokalee Workers held up Boycott Wendy’s signs and silently proceeded out together. It was a powerful experience to witness the inner workings of corporate America, to see how they value their “brand image” over the lives of farmworkers who they are making money off of by disadvantaging and harming.

After learning more about the Fair Food Program and experiencing Wendy’s refusal to even have a discussion about it, I will think twice before pulling up to a Wendy’s drive-through window. I understand that no corporation or business is perfect; there is still a lot of progress to be made on many fronts. Yet if I believe protecting farmworkers is important, shouldn’t I participate if I’m able? If abstaining from a chicken sandwich and Frosty to voice my opposition can make even a small difference, then I will use my power as a consumer to make my voice heard.

Before enjoying a Frosty, I will think about the farmworker who isn’t being protected against sexual harassment in the workplace or the farmworker who can’t make enough money to feed his children because Wendy’s refuses to pay 1 cent more per pound of tomatoes to ensure a living wage. I now see that my patronage can be used to support restaurants that are working toward the common good and assuming their responsibility to protect farmworkers. What do you think about the #BoycottWendys campaign?

Last weekend we held our annual Mission Immersion Weekend for women discerning religious life and/or service in the Church.  It was a weekend of prayer, laughter, service, reflection, eating, playing, and living together as a community.  I came away from the weekend with a sore back and a full heart.

We did several different types of service during the weekend.  Before and after each event, we had time for input on service, social justice, charity, and how to reflect on our experiences (theological reflection).  At the end of each day, we reflected on our day, the prayer, time together, service, and anyway we were aware of God’s presence with us during the day.

One of the big lessons for me was that the soil in which we planted tomatoes and potatoes was truly holy ground.  It is holy and it is also “holy mystery”.

You see, for one of our service projects we went to Shepherd’s Corner Ecology Center for a presentation by Sr. Diane on the center and on the care of creation.  Afterward, we worked with Leslie, the resident farmer.  Leslie taught us how to prepare the soil and to plant potatoes and tomatoes.  In fact, we planted 50 pounds of spuds and around 60 tomato plants in the process.  It was hard work and it was also a time of reflection and prayer.

This planting process all came into clear focus as I was preparing the hole for a young tomato plant – a Roma variety to be exact.  The craters we prepared were two feet apart and each received a nice sized scoop of fertilizer (don’t worry I’m not going to get specific here).  Then, before placing the tomato plant into the ground, we needed to mix the fertilizer into the soil.  As I knelt to do this, I dug in with both of my hands.  Pulling my hands up and out, turning the soil, I stopped mid-motion, transfixed on the soil pouring between my gloved fingers.  I was overwhelmed with the realization that this soil, or at least all of the elements present in the soil, have existed since the beginning of time. This soil has supported life before.  It has grown vegetables, grass, served as a bed for burrowing animals, and perhaps even the foundation of a tent or a place where person or animal slept for a while.  Many people and animals have walked across it and in doing so have left their footprints for all eternity.

Lifting the soil and allowing it to flow through my gloved hands also reminds me of God’s Grandeur.  In Gerard Manly Hopkins poem we read:

The world is charged with the grandeur of God.
It will flame out, like shining from shook foil;
It gathers to a greatness,
like the ooze of oil crushed.
Why do men then now not reck his rod?
Generations have trod, have trod, have trod;
And all is seared with trade; bleared, smeared with toil;
And wears man’s smudge and shares man’s smell: the soil
Is bare now, nor can foot feel, being shod.
And for all this, nature is never spent;
There lives the dearest freshness deep down things;
And though the last lights off the black West went
Oh, morning, at the brown brink eastward, springs —
Because the Holy Ghost over the bent
World broods with warm breast and with ah! bright wings.
God created all and is present in all.
We are intimately united with the soil in that we are made of the same elements.

This Holy Ground will nurture the tomatoes and will then lie fallow until we once again turn its dark, moist humus and once again life will spring forth crying out God’s Grandeur.

In this world of chaos brought to us by leaders all over, not just our own, I found a quiet place that called me back to the reality that is possible in the believing community. I am borrowing very heavily from the talk given at Notre Dame’s commencement 2017. Father Gregory Boyle, S.J., author of Tattoos on the Heart was awarded this year’s Laetare Medal and was one of the major speakers. I am paraphrasing his thoughts but felt they could apply to all of us building peace in the kingdom on earth.

Imagine with God a circle of compassion and then imagine nobody standing outside that circle. We must leave our comfort zones and dismantle the barriers that exclude anyone. Matthew 25 speaks to this thinking and the believing community is called to be Gospel people.

We must stand with those whose dignity has been denied. We must go to the margins and we need to brace ourselves because people will accuse us of wasting our time. Members of the believing community struggle because some of their friends and family members continue to negate the humanity of those who are the beggars standing on the street corner, the ones who are different in some way. “Get a job”; “If you’d give up the drugs, your life would be great”; “Well we all know how her Mother lived”; there is much more hateful language around about the one who just never measured up, no way, no how. Can the believing community make more of an effort to stop it?

Do we stand in awe of what the poor have to carry or stand in judgment at how they carry it?

Father Boyle concludes: “The measure of our compassion lies not in our service of those on the margins but only in our willingness to be in kinship with them.”