One of the reasons I embrace being a Dominican is our call to study. Long before I became an associate, I was drawn to spiritual and social justice readings and have been blessed with friends who have turned me on to authors such as Richard Rohr, Joan Chittister, and Ann LaMotte. I do not think it a coincidence that these friends are also now Dominicans and together our study has expanded to include Sr. Diana Culbertson, OP, John Dear, and Pope Francis, to name a few.

Often, the most challenging part of study is when you finish it and say, after prayerful contemplation as an individual and as a group, “Ok,  how does what I read fit into my ministry…my faith life…my prayer life…the other parts of the Dominican Charism?” Laudato Si provided a powerful opportunity to grow in how we lived out our mission of caring for the earth.

A few weeks ago, I attended a local gathering/march in honor of Earth Day.  Earth Day events have been happening for years, but I believe this was likely the best-attended event of late, due to the “Science” theme that drew not only environmentalists but teachers, doctors, grandparents – all who believe in “science, not silence!”

There was a sign-making table and I had noticed that unlike most previous marches/gatherings I have attended, there seemed to be a lack of signs that were faith-based. 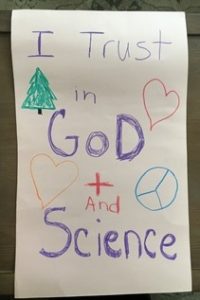 I am not an artist but managed to come up with what I thought was a meaningful slogan and added some symbols…and then anxiously waded back into the crowd.  I began to feel self-conscious…will the younger people think me weird? Was this sign even appropriate? After several minutes of scanning the signs, I was relieved to see another person of my generation with a sign similar to mine. At the end of the march, a man who looked to be in the millennial age bracket came up to me and told me he liked my sign. I hoped my smile and sincere thanks expressed the gratitude I felt from his affirmation!

5 responses to “Witnessing for the Both And…”