Many individuals in developing countries lack basic access to clean, accessible drinking water, we know this. In 2010, the United Nations recognized the human right to water and sanitation and has since been working to ensure all have access to this basic human right. This is one of the Sustainable Development Goals that the United Nations is working to achieve by 2030.

According to the Interfaith Center on Corporate Responsibility, “while 70 percent of the Earth’s surface is covered by water, only 2.6 percent of it is usable freshwater and 884 million people do not have access to a safe drinking water source.” Having access to clean, drinkable water is a life necessity and is also mandatory in order to adhere to Catholic Social Teaching and uphold the dignity of each person.

Yet, there’s been a lot of rhetoric lately in the public sphere urging leaders to focus on taking care of American citizens before getting involved in international affairs. While the United Nations (and many other faith-based and civil society organizations) have made great progress in providing access to clean water and sanitation around the world, it may be surprising that the United States is facing a water crisis at home. Let’s not so quickly forget Flint, Michigan where residents still cannot drink their tap water, or California where recent droughts and the melting of mountain snowpack has resulted in water restrictions across the state.

According to a new study from Michigan State University, in 5 years, water will be unaffordable to more than 35% of the U.S. population. This is a staggering and almost unbelievable statistic; that’s roughly 112.5 million people!

Why the rising costs? Among many things, aging infrastructure, water pollution, and water privatization. What can we do? Let’s start small by being responsible consumers: conserve water and stop buying bottled water. Ask questions and do some research. Do the producers you purchase from have sustainable water practices and view water as a human right rather than something to be privatized?

We all need water, a basic human right, to survive. Let’s continue having these discussions and engaging with others on these critical justice issues. What else can we do to ensure all have access to water?

A few days ago, Pope Francis tweeted “Migrants are our brothers and sisters in search of a better life, far away from poverty, hunger, and war.”

His words spoke to my heart and brought back memories from 15 years ago, when one of my journalist colleagues and I spent months with migrant workers and their families to gather information for a series of stories that chronicled their lives.

I recalled the slum-like living conditions of many of the migrants –apartments that felt more like warehouses than homes; houses with exposed live electrical wires and overcrowded no-pest strips dangling from water-stained ceilings; roach-infested rental properties in desperate need of repairs.

My retrospection elicited the same emotions that I experienced all those years ago – heartbreak and repulsion.

I still cannot comprehend what motivates people to mistreat, exploit, abuse, and oppress others, especially those who are vulnerable, like the migrants. If those landlords could have seen those migrants as their brothers and sisters, they would treat them with dignity.

Pope Francis is right. All of the migrant workers with whom we spent time were in search of a better life.

Like the European immigrants who came to America, the migrant workers who shared their stories came seeking greater economic opportunities. Many had left their homeland to escape crushing poverty and, in some cases, repressive political regimes.

They, too, were drawn to the United States by the promise of the American dream. They had spent their last to come to this country for a chance at jobs that most Americans turn down.

Migrant after migrant shared how their primarily goal was to work for money that could be sent back home to pay for things like food, shoes, housing, and education for the loved ones they had left behind. Many expressed hope to be able to return to their families someday.

One man shared that the only source of water in his small rural village was a single pipe and that the houses had dirt floors and tin roofs. He said he could work all day and make nothing at home.

I am inspired by the fact that the Catholic Church is committed to the just treatment of migrants, immigrants and refugees and that church leaders have called for increased pastoral outreach among the migrants.

I am blessed to have seen the church in action:

The couple who couldn’t speak Spanish yet befriended a Spanish-speaking migrant couple and became godparents to their three children.

The volunteers who gathered in church basements and fellowship halls to teach English classes to migrant workers and their children.

The woman who accompanied an injured migrant worker to the emergency room to translate for him and hospital staff.

The advocate who established a nonprofit agency to meet the needs of migrants.

The priest who provided pastoral support and guidance to the migrants.

Like the priest, the attorney, the advocate, the woman, the volunteers, and the couple, we (who are the church) have the power to change the way our migrant brothers and sisters are treated. 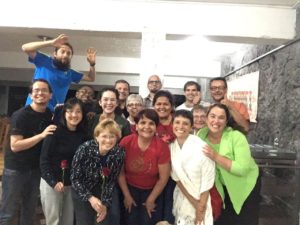 Tuesday evening as I gathered with those in my house to watch the fireworks, we agreed that they seemed like a fitting conclusion for our trip to Mexico City for the Inside Mexico experience and for our return to the Akron motherhouse community for a couple of days. Filled to the brim with the study of language, culture, and human rights situations, what also touched me was the community at Casa Xitla led by Pablo Romo Cedano, Martha Elena Welsh Herrera, and the wonderful administrator, Sandra, and all the staff. I could visibly see the love and care they have for each other and for those who come for peace building strategies, retreats, or other experiences, especially as we celebrated Sandra’s birthday with song and dance one of the evenings. Their eyes shone with delight as they laughed and affirmed each other.

I could not help but think of them on July 4th during our celebration of the Eucharist in Akron as we sang, “This is my Song”. The lyrics reminded me of how each person, each community in all parts of the world simply wants to live in love and peace, meeting the needs of family and community, and having opportunities to grow. I invite you to take a moment to read the lyrics below and listen to the words of this song on YouTube by clicking here.

“This is my song, O God of all the nations
A song of peace for lands afar and mine
This is my home, the country where my heart is
Here are my hopes, my dreams, my holy shrine
But other hearts in other lands are beating
With hopes and dreams as true and high as mine

My country’s skies are bluer than the ocean
And sunlight beams on clover leaf and pine
But other lands have sunlight too and clover
And skies are everywhere as blue as mine
O hear my song, thou God of all the nations
A song of peace for their land and for mine”

As I return to my work, I am well aware that the experience in Mexico didn’t end the day I returned, rather, I am called and challenged to continue to work for justice and peace here and to help strengthen connections with those I met and to share their stories.

And if you are discerning vowed life, married life, single life…, consider calling one of our vocation ministers. They are excellent at walking with women who are exploring how they are being called to live their lives to the fullest potential as followers of Christ.

Sister Mary Faith Geelan, OP, was honored with a Distinguished Alumni Award by Ohio Dominican University, Columbus, OH, at a ceremony during Alumni Weekend on June 24, 2017.

Established in 1980, The Distinguished Alumni Award recognizes an alumna or alumnus who demonstrates a commitment to serving others in a global society as an ethical and effective leader, and whose service is grounded in the pursuit of truth, justice, and peace.

Sr. Mary Faith was a member of the Class of 1960. She entered the Dominican Sisters in 1955 and graduated from the former St. Mary of the Springs, now Ohio Dominican University, with a Bachelor of Science in Elementary Education and History. She went on to earn her Master of Arts in American History from the University of Notre Dame, and her Master of Social Work from Marywood University.

She served in a variety of academic roles in Connecticut, New York, Pennsylvania,

and Ohio throughout her career.