Two by Two…Just as God had Commanded

A recent federal report noted that global warming is already having a negative effect in the United States despite President Trump’s claim that global warming is a “hoax.” We, the Dominican Sisters of Peace and Associates have long been committed to “reducing the impact of global climate change. We support actions, programs and legislation on all levels to protect Earth’s climate, with particular concern for the negative impact affecting the lives of the poor” and this report doesn’t come as a huge surprise (Corporate Stance May 31, 2016). Our Congregation, along with numerous other faith and community based organizations continually work to combat climate change. Yet, progress and movement in the government seems much more difficult to realize. Scientists are now fearful that the current Administration may try to change or ignore this Climate Change Report, but despite the uncertainty, there is hope building in Congress.

Currently in the House of Representatives bipartisan support is rallying around the Climate Solutions Caucus. This Caucus, cleverly nicknamed the “Noah’s Ark Caucus” because Representatives must enter two-by-two, one Democrat and one Republican together, is also quite fitting for a group that aims to find climate solutions as sea levels continue to rise and many coastal cities are finding themselves flooded more often.

This Caucus is the first of its kind and has had the support of many faith groups. There are currently 52 members, and the group is provided with monthly briefing by science and policy experts. The Noah’s Ark Caucus urged the President to remain in the Paris Agreement and is dedicated to continue working to build relationships across the aisle to mitigate climate change.

Click here for more information, or read the draft of the Climate Change Report here. For continued progress, it is crucial that Members of Congress work together in a bipartisan fashion to protect the most vulnerable in our communities who are negatively and disproportionately impacted by climate change. Take action by calling your Representative and urging them to join the Noah’s Ark Caucus to work toward bipartisan and critically necessary solutions or send them a message here.

John Lennon’s “Imagine” has always been one of my favorite songs.

For me, the song represents what I have always hoped for — a world where things that divide people do not exist. Like Lennon expresses in the song, I wish for world peace and harmony.

I find it amazing that a song released more than 45 years ago has as much relevance today – when we are surrounded by cruelty, hate, poverty, racism, and fear. The call for peace is needed as much today as it was in 1971, when the song was released.

I was reminded last week of Imagine’s ability to transcend age, culture, religion, race, and other things that keep people apart when a friend shared with me a video of Pentatonix singing Lennon’s Imagine.

In the moving video, the five-member a cappella group shares a message of inclusivity.

Each member holds up a sign with a word that describes her/him personally and then flips it over to show another word that characterizes him/her generally. The words and phrases include “LGBTQ+,” “Man,” “Jewish,” “American,” “Black,” “Christian,” “Latina” and “Woman.”

At the end of the video, each of the five members takes a board and writes a letter on it. When they flip them over in unison, the letters spell out the word: “H-U-M-A-N.”

The powerful video is a beautiful reminder that we should work to realize unity in diversity because – despite all of the labels that can divide us — we’re all human.

John Lennon (and his co-writer wife, Yoko Ono) asked us to consider what the harmony of one humanity would be like:

In 2017, Pentatonix is still asking us to do some intense soul searching to examine the things that divide us. Like Lennon, the group speaks directly to the humanity within each of us with a plea for justice, morality, and unity.

Take a look and listen: 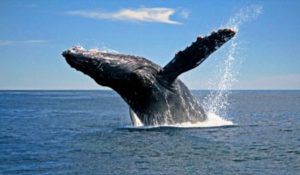 Perhaps you call it something else like I do.  Mine is an ever expanding “adventures and wish list.”  Over the years, my list has expanded, things have been crossed off either having been accomplished or I’ve decided it isn’t something I really want to do, like bungee jumping. That came off the list after I broke my leg preparing for a trip to the Everglades (that’s another blog).  The thought of reinjuring it . . . well that’s just too terrifying.

August is usually the month when I go on vacation.  This year, I went to Boston, Massachusetts.  In reviewing the “things to do in Boston” section of the tour guide, I came across Whale Watch Tours from the Boston Aquarium and knew I was about to cross off another adventure from my list.  I researched the outfit place to be sure that it adhered to the guidelines under the Marine Mammals Protection Act.  Reassured and carrying my handy dandy tote with sunscreen, a hat, whale watch guide, snacks, water and my cell phone to take pictures, I set off.

Our tour boat, the Asteria, encountered multiple humpback whales feeding, breaching and playing in the smooth ocean waves.  These creatures were magnificent!  To watch them was poetry and prayer.  I recalled Psalm 148:7 – a psalm of praise – where the psalmist sings, “Praise the LORD from the earth, you great sea creatures and all ocean depths.”  Indeed, as the whale breached the surface of the water and hovered in the air for a moment, time stood still and I realized that this whale was praising God in its magnificent whaleness.  Being just as God created it – reveling in the feel of the water, jumping to communicate with the other humpbacks, eating fish by the ton – this whale was alive and in it’s very being praising God.

How do I praise God for the wonder of my being?  How do you?

God calls us to respect all life and that begins with our own lives.  How do I care for my body, mind, spirit and live a life worthy of my call?  I invite you to take a moment to be aware of where you are right now.  Where you’re sitting, standing, laying down…be aware of your breathing, your heart beat . . . God dwelling within and around you – be aware of it all.  In whatever way you feel called to, praise God for the wonder of your being and ask God to help you be the best YOU, you can be.

God calling you to something more?  Contact us, to start the conversation.

The Dominican Sisters of Peace have endorsed, and fully support, this statement from the Leadership Conference of Women Religious calling for the President to engage in dialogue and negotiation with North Korea. Please click here to read the statement.

The Dominican Sisters Conference places the transforming grace of the Dominican charism at the service of our world and Church, especially in responding to the cry of the poor and to the urgent need to preserve Earth’s integrity. The DSC has issued a statement in response to the recent white supremacist demonstrations in Charlottesville. To read the entire statement, click here.