In response to the events in #Charlottesville, the Leadership Conference of Women Religious has released a statement condemning racism in all its harmful forms. Read the complete text here.

While the President may believe that his recent statements on racial violence are appropriate, people of faith, and particularly women religious had statements of their own. Click here to read excerpts from the statements by the LCWR, the Sisters of Charity of Nazareth, Adrian Dominicans and more in the Global Sisters Report.

So, where were you and what were you doing on Monday, August 21, from noon until around 3, depending on your time zone?

Some people paid thousands of dollars to be in planes 35,000 feet in the air; some planned their whole vacation around it and went to  Oregon or Missouri or Kentucky or South Carolina and gave a great boost to the economies of some small rural towns most had  never heard of before; some paid hundreds of dollars for a pair of special glasses, and some, like me, paid $6.99 and prayed the glasses were the right kind; some climbed mountains or went to the deserts and prayed to the gods for protection as the sky darkened more and more, and some hid as the birds stopped singing and animals became a bit confused—was it night already?

Yes, nature gave us quite a show (really awesome in “the path of totality”) and reminded us that we are such silly humans if we thought we could control all of creation. This was another reminder that we exist in nature, we do not own it. There have been total eclipses many times in history and salvation history, we just might not have been alive or in the right place to see them, but that does nothing to diminish the mystery of how it happens and why. A lot of us see nature, in all its forms, as one of God’s greatest mysteries. Many of us do try to harness her energy or divert her rivers for our own convenience, when will we ever learn….it just can’t be done. Most of us have been feeling overwhelmed by anger, sadness, frustration and disappointment over the events of the last few weeks, but Nature has given us something to revel in, to marvel in, and to be humbled by, all in of  about 2 minutes.

I think Jimmy Fallon said it best, “We can’t go backward.” It’s been over a week since the events in Charlottesville and I’m still trying to understand how it occurred. How can one person hate another just because of their race, gender, nationality, sexual orientation, religion, etc? But it does happen and the danger is real. This is especially true with groups such as neo-Nazi’s. Richard Frankel of the University of Louisiana, Lafayette explains that Nazi’s “fought to destroy the most basic values that America has claimed to stand for over more than two centuries: the fundamental dignity and equality of all people.” Our country has come a long way in building equality for all people and we cannot allow hate groups to push us backward.

Malcolm Gladwell, the author of Tipping Point, explains the rise of hate speech and rallies as backlash to the change. He states that we may be in an “extended period of backlash” as we face “overwhelming amounts of change” in a short period of time. Unfortunately, the current political climate has encouraged this backlash and it has resulted in violent rallies and the murder of innocent people. As a Sister of Peace, it’s hard to condone violence of any kind but it’s especially difficult to hear and see the violence associated with white supremacists, neo-Nazi’s or the KKK that work to damage the fundamental values of dignity and equality of all.

Women have come a long way from being considered a possession but not nearly far enough. Minorities have also come a long way from slavery and Jim Crow but not far enough. Many are still enslaved by poverty, mental illness, and lack of education. They should have greater representation in government, business and church. But here’s the dilemma. These changes have left some feeling off course and left behind. It can generate the fear that turns into hate and violence. Together we must promote opportunities for all to live healthy and peaceful lives.

Jesus gave us peace and compels us to make peace on the earth… to share it with others. This is the time to use nonviolent approaches to speak and act against violence. So what is the answer to how we react to hateful speech and Nazism? What we don’t do is incite or perpetuate violence on anyone no matter how much we disagree with them. We don’t provoke them or participate in shouting matches. You cannot change a person’s opinion by yelling at them. Violence only begets more violence.

What can we do? Don’t show up. Let the hate speechers talk to themselves. Refuse to give them an audience. Gather together at another site. Display signs of peace, respect, dignity not hate. Pray together. Be silent. Presence is more powerful than words. Support events that promote unity and peace. Let’s not go backward by giving in to the tactics and speech of hatred and fear.  Let us move forward with peace.

For the past few weeks, there has been so much hype about the first time in about 40 years we in North America will be treated to a complete solar Eclipse today, August 21, 2017.  I must admit I am excited with my pinhole mirror ready to project it onto my awaiting white card, hopeful that the clouds will get out of the way for this event.

How much we depend on the ever present sun to light and warm our planet, and it does so with no discrimination based on our human made borders! To see the sun and its radiant light blotted out for even just a few minutes in the middle of the day is a bit scary, even though we face the nightly darkness at the end of each day without much angst.

The news has also focused lately on a “social eclipse” occurring in our country–White Supremist, Nazi, and KKK groups coming out in broad daylight spreading the darkness of hate and exclusion, thereby repudiating the vision of a culture of peaceful inclusion proclaimed in our US Constitutions and Statue of Liberty. As I watch this, I am alarmed to see the violence meets violence reaction of some anti-Nazi groups and I am reminded of Jesus’ warning: “Those who take up the sword will perish by the sword.”  The darkness grows as violence spreads. 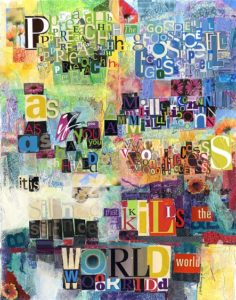 States and beyond to call out the terror of violence—and to mobilize toward a culture of peace and nonviolence.  At a time when violence is incessantly touted—from reckless talk about nuclear war with North Korea, to support for white supremacy and hate groups, to attacks on immigrants and Muslims, to a dramatic surge in military spending—tens of thousands of people from every state across the country, and in cities around the globe, will advocate for a new nonviolent direction for their lives, communities, nations, and world.

As many as one thousand local actions—marches, rallies, vigils and other forms of peaceful witness and resistance to be held throughout the third week of September—will publicly declare that nonviolent options are effective, powerful, and needed now more than ever.  They will invite our society, and every society, to reject the grip of violence on our minds and our policies, and to discover instead the life-giving power of active and creative nonviolence for a world where everyone counts.”

This is a moment when all followers of Christ need to come out like the sun after a total eclipse and let the light of their love banish the darkness, heeding St. Catherine’s admonition: “Preach the truth as if you had a million voices. It is silence that kills the world.”

[The artwork is by Jan Schlichting, OP.]