What does the Lord want of you?

Come find a quiet space to listen, pray, and reflect on how God is calling you to be a disciple.
Join other young, single Catholic women, age 18-45 to explore God’s will for you, and to learn about contemporary religious life. Our “Come and See” retreat is a perfect opportunity for personal reflection, and to explore Dominican life, meet our Sisters, and share in our Community life.

Volunteers Needed for Human Trafficking Prevention Outreach
Dominican Sisters of Peace will “SOAP UP” Columbus on February 17, 2018
9:30 am to 2:30 pm 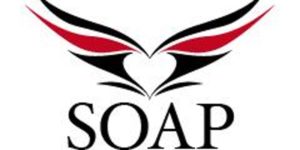 The Martin de Porres Center, 2330 Airport Road, Columbus, OH, will be the site of the 2018 “SOAP UP COLUMBUS” event, a human trafficking prevention outreach sponsored by the Dominican Sisters of Peace and ADAMH, the Alcohol, Drug and Mental Health Board of Franklin County.

SOAP (Save Our Adolescents from Prostitution) is an outreach designed to fight human trafficking at large events. The Columbus SOAP eventis usually held a few weeks before an annual sports and fitness show that draws nearly 200,000 people to the city.

“Events like this draw so many men who are looking for sex,” said Sr. Nadine Buchanan, a Dominican Sister of Peace who has been recognized for her work with trafficked women. “Hundreds of women and girls – as young as 12 or 13 – are bussed in to answer that demand. We are trying to help them find a way out of this life.”

Volunteers will take part in an educational presentation about human trafficking, then assist in wrapping hotel-size soaps with bright red wrappers printed with the phone number for the National Human Trafficking Helpline. Volunteers may also distribute the wrapped soaps, along with posters of missing girls who may be involved in sex trafficking, to local hotels and motels.

SOAP UP COLUMBUS is supported by a grant from ADAMH, the Alcohol, Drug and Mental Health Board of Franklin County.

For more information or to register for SOAP UP COLUMBUS, go to https://www.eventbrite.com/e/soap-up-the-arnold-classic-2018-tickets-41824586464.

We all need energy.  That’s why we eat – to energize our bodies.  It’s as simple as “no energy – no life.”  That’s also why we need the sun’s energy to support life on our lovely planet.  Too little energy equals death and too much energy also equals death.  Well you might ask, how do we maintain a healthy balance?  Earth knows how to do this without even thinking.  She is an inherent balancer.  However, we humans have warped the balance and Earth is struggling to bring it back.

What to do?  The Interfaith Power and Light organization or IPL began setting up a nation-wide network of partnerships to work toward an Earth ministry and to educate people who are concerned about the climate change we are experiencing lately.  Their mission is “to be faithful stewards of Creation by responding to global warming through the promotion of energy conservation, energy efficiency, and renewable energy.  This campaign intends to protect the earth’s ecosystems, safeguard the health of all Creation, and ensure sufficient, sustainable energy for all.”

So, the color of energy is GREEN!  In fact we often hear of groups and other organizations calling themselves “Green Energy.”  Here in Ohio there is a group called Green Energy Ohio or GEO.  Since part of our mission as Dominican Sisters of Peace and Associates in mission is to “foster God’s web of life,” we strive to be updated on the ways we might do this.  To find out what IPL is doing in your state, take a look at their web page (just google the name) and join up to get their on-line newsletter.  Truly you will feel better.  There are a lot of people in our world trying to offset the effects of global warming and to reduce the amount of carbon in the atmosphere.  Let join in the exciting fun of being rebellious!

Dominican Sister of Peace James Grace Richmond, OP, 92, died at Sansbury Care Center in St. Catharine, KY, on Friday, January 19, 2018.  She was born in Memphis, TN, in 1925 to Grace Maloney and Basil W. Richmond. She entered the former congregation of the Kentucky Dominicans, now the Dominican Sisters of Peace, in 1953. She served God’s people for more than 63 years.

Sr. James Grace earned a Bachelor of Science in Social Science from Memphis State College in 1948 and earned her Master of Arts in Business Education from the same institution 20 years later.

Sr. James Grace began her ministry as a teacher, working in Illinois, Nebraska, West Virginia, Kentucky, and Tennessee. She also served her Kentucky community as the Coordinator of St. Catharine Motherhouse and as a Regional Coordinator.

In the early 1970’s, Sr. James Grace was moved to serve her community as a pastoral minister in the parishes and hospitals of her hometown of Memphis, TN. This service to God’s people had the added benefit of enabling Sister to spend more time with her beloved family.

Sr. James Grace entered Sansbury Care Center in 2009, where she served God, her Sisters and the Church with her ministry of prayer and presence.

Sr. James Grace was survived by several nieces and nephews.

Memorial gifts in Sr. James Grace Richmond’s memory may be submitted securely online or sent to:

For a printable copy of this memorial, please click here.

Sisters Anna and Mary were laughing together as I came into the room. It was that hearty laughter shared by two friends who just shared something very funny and most probably something that only they would understand – being that they’ve been friends and Dominican Sisters together for more than 60 years.

I sat down with them and asked them what they were laughing about.

Mary replied, “Oh, about old hands and old times.” Smiling, she looked to Anna and picked up her hand as she said, “See this scar here?” She pointed to a white scar between the knuckles of Anna’s right hand.

“Well,” said Anna, “it is from when my brother and I decided we should be desperados, and that we needed to practice our knife-work.”

I grinned.  She was one of the gentlest people I knew – and the most unlikely person to carry a knife!  She was more apt to be speaking to someone in spiritual direction, bereavement ministry or preaching about the need for peace in our hearts and in our world.  Yet, here she was telling me about her practice with a jack knife – and that her knife slipped from her wet hands as she threw it and grazed her hand before it fell to the ground.  She and her brother were laughing so hard they didn’t even see the blood dripping from her hand until much later.

Mary chimed in, “And I was talking about how my hands still know how to dance, even if my legs don’t.” Anna reached over, held Mary’s hands in her own and smiled. “I remember when you danced at the professions, when it seemed as if you and the Holy Spirit would take flight at any moment. Your hands never stopped moving, until the end.  They are so expressive.”

Mary raised her hands and let them float through the air in a gesture of prayer, “And boy, they can still dance.” She and Anna laughed again as they held each other’s age-worn hands…wrinkles, prominent veins, beauty marks, scars and all.

These hands speak of resiliency, faith, and loving service. 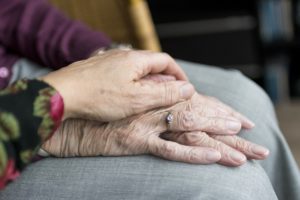