I love Gospel Music.  The songs are so down to earth and so joyously in love with God that they lift your heart and your spirit.  My favorite is one called Can He, Could He, Would He?  This is the first line:

Can he save me, Could he love me, Would he take me, Did he really?

On Easter Sunday Jesus saved us, He showed his love for us, He took us to his heart. He really, really did.

It’s difficult to find the words that express what Easter really means to us believing Christians. What it doesn’t mean is the Easter Bunny. Sorry.

The life of Jesus has been called The Greatest Story Ever Told and it surely is that. At the moment he set foot on the banks of the Jordan to be baptized, the drama began to unfold.

He wrestled with the temptation to use the power he had to fix everything in one fell swoop, but he couldn’t. That was not the plan.

He chose his disciples the way Samuel chose David; he trusted that God would reveal them to him. Just like we do when trying to make a big decision.

The healing miracles took a lot out of him. They required total, absolute trust in God, no hesitation and no fear. He must have known disappointment when so many came for that and only that, caring nothing for his message.

The anger and resentment of the official leaders of the people resulted in one confrontation after another, each one adding to the pile of so-called evidence against him. He was fully aware of the dangers, but he persevered.

Flaunting all the rules that bound his people and gathering to himself those who had felt worthless, were the paving stones on the road to his death.

Still, he kept on. 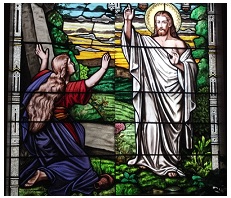 Finally, he told people that unless they ate his body and drank his blood they could not have life. That was the last straw. Then at the Last Supper he explained what he meant when he raised the bread and wine. That is our legacy.

Then came the arrest, the beatings, the hypocrisy and betrayal of the crowd, which probably was the worst part. His death was as if the sun itself was dying. All the reason for hope was bleeding to death on a cross.

Those feelings are not unfamiliar to most of us. That is what makes Easter Sunday what it is: the resurrection of Hope and Faith and unceasing Love.

This story is so powerful it overshadows everything else and for many it is frightening. It seems to demand something from us, something we aren’t  willing to give. That is too much.

But celebrating Christ in the Easter mystery transforms all who will not diminish or limit Easter to the Easter Bunny and colored eggs.

As the second line of the song says: Yes, He can, He could, He would and He did!

2 responses to “THE PROMISE AND THE FULFILLMENT”