…adventures of an itinerant vocation minister….

I pray in my car.

Actually, my confession is that I pray in my car more than I do in our chapel.

You may not think that is such a big admission but, you see I’m a Sister.  I am a Catholic Dominican Sister with vows of poverty, chastity and obedience.  In our Constitutions (the general guidelines for our life and how we live it) it stresses that we are women of prayer.  That is true, I am a woman of prayer and I’m also an “itinerant,” which means “traveling from place to place.” As an itinerant I often find myself somewhere between here…and there…. Thus, I often find myself praying in my car.

Do you pray in your car?

I suspect you do.

Several years ago I came across a book called My Monastery is a Minivan by Denise Roy.  In it, Roy, a mother of four children, writes of how her thoughts about prayer, holiness, and places of holiness had changed over the years.  Having studied theology, she envisioned places of prayer as monasteries, chapels, convents, and churches.  Then, in the reality of her life as a wife, mother and woman of prayer, she found that her minivan was indeed her monastery.

When I was discerning my call to religious life, I was working full time and had a commute of 45 minutes to an hour each way.  The cassette (yes, a few years ago) I’d pop into the player each morning and evening was one of John Michael Talbot’s which contained psalms of Morning Prayer – on the way to work – and Evening Prayer – on the way home.  This practice eased me into the day and grounded me in prayer and in my awareness of God. It sustained me and nourished me as I traveled and as I continued to discern, “The Call.”

There are other sisters I know who pray in the car.  Sister Aimee Ryan and I lived together in Miami.  Sr. Aimee had a practice of praying a decade of the rosary each time she waited at a light to cross U.S. 1.  Some days she could pray an entire 10 decades in her travels around town.  For me, as a young sister, her witness of faith inspired me to find ways to remind myself to pray when stopped at a light or passing a church or other landmark. 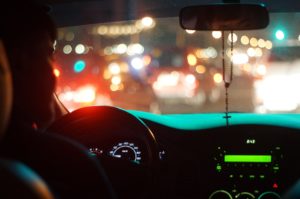 The practice of prayer while traveling is an ancient one.  We hear of pilgrims to the Holy Land, as early as 100 AD, praying the Way of the Cross as they journeyed to Jerusalem.  Prayer on the go, or traveling prayers are ever ancient and ever new.

St. Dominic prayed as he traveled by foot from Spain to France to Italy.  He was said to either speak of God or to God as he walked.  Often he would break out into holy song and praise of God’s creation as he went through fields of sunflowers or crossed rushing brooks.  He delighted in God’s creation and he told God and all who would listen.

Today, as I drive from Massachusetts to Connecticut and tomorrow when I get in the car again, I will be praying.  I’ll pray for you, for our world, for those who are celebrating life and those who are waiting to enter into the next life and all the while I will be thanking God for the many gifts that surround me each day.

How will you pray in the car today?