In 1970, Sr. Mary Jordan followed God’s call to effect social and systemic change in the world around her and began a new ministry of faith-based community organizing. She served with a number of community organizations in New Orleans and as a member of the General Council for her Congregation while studying for her Masters in Religious Studies from the University of Chicago, which she earned in 1981.

In her ministry at Las Casas in Thomas, OK, from 1981 to 1987, Sr. Mary Jordan worked with other Sisters and the local authorities to help create a better standard of community living for the local members of Native American tribes, as well as working in addiction ministries.

On her return to New Orleans, Sr. Mary Jordan became involved in the Broadmoor community, and, working with other faith-based organizations, was able to gain a commitment from city government to make positive changes to aid the poor in the city.

In 1992, Sr. Mary Jordan founded WIN (Working Interfaith Network), an organization that helps faith-based groups and congregations leverage resources to strengthen the congregations and the community. She served at WIN until 2000, when she accepted the position of Prioress at her Congregation.

She served the New Orleans Motherhouse in prayer and service until 2010, when she moved to the Mohun Health Care Center in Columbus, OH, to complete her ministry of prayer and presence.

Sr. Mary Jordan was preceded in death by her parents, Birtles and Julie Seghers Langenhennig, and her sister Jessie Scalia. She is survived by several nieces and nephews.

Sr. Mary Jordan will be buried at the Dominican Sisters Cemetery at Rosary Spirit Life Center in Ponchatoula, LA. Interment will take place 11:00am on Friday, July 20.

Memorials in honor of Sr. Jordan may be submitted securely online or sent to:
Dominican Sisters of Peace
2320 Airport Drive
Columbus, OH 43219-2098

Sr. Loyola was born Marie Coletta on February 18, 1923, to Caroline Lind and Albert A. Ernst of Apple Creek, OH. The youngest of seven siblings, Sr. Loyola was introduced to community life at an early age.

When she entered the community of the Dominican Sisters of Akron in 1940, she wrote in her letter requesting profession, “I choose this vocation to please God alone, and I hope and pray that He will be pleased with my choice.”

Sr. Loyola earned her Bachelor of Science in Education from Saint John College in 1950. She later earned her Master of Science in Education from the same institution in 1968. Throughout her professional life, Sr. Loyola attended workshops and institutes so that she could keep up with the changing trends in education. She truly believed that teaching was the ministry where she believed she could best do God’s will, by shaping the minds and hearts of children.

In her 55 years as an educator, Sr. Loyola ministered to thousands of children and their families. She served at numerous schools in Ohio, including St. Paul, St. Augustine, Immaculate Conception and, of course, her own alma mater, Our Lady of the Elms. After her retirement, she returned to Our Lady of the Elms High School as an aide, where she served for 13 years.

Given her love of the children that she taught, there is no doubt that many of them were remembered as Sr. Loyola continued her ministry of prayer and presence at the Akron Motherhouse and the Regina Health Center.

Sr. Loyola was preceded in death by her parents, her brothers, Francis, Lynn and Charles, and her sisters, Alice Emerson, Marjorie Tinsler and Lillian. She is survived by several nieces, nephews, grandnieces, and grandnephews. Sr. Loyola was remembered at her wake at the Our Lady of the Elms Motherhouse on Friday, May 25. Mass of Resurrection was celebrated on Saturday, May 26. Sr. Loyola is interred at the Holy Cross Cemetery in Akron, OH.

Memorials in honor of Sr. Loyola may be submitted securely online or sent to:

I love the sensation of being out on a lake in a boat – a quiet lake, a row boat, no one else around.

Having rowed the boat out to that quiet place, I lift the oars and let them rest on the sides.  Then, I lean back and listen . . .

What do I hear?  I hear the water lapping against the boat, the movement of the water, birds, the breeze and the myriad of living things around the lake.  I hear my heartbeat, my breath and my thoughts.  In this place of quiet and solitude, I begin to reflect on my day and ask God to help me see where God was present with me.  As the moments come to mind I look for God and for my response or awareness of God or lack thereof.  As one memory becomes more focused, I pause there and wait for God to illumine that for which I will give thanks and that for which I will ask forgiveness.  Resting with God I give thanks and pray for the grace to be and live always in God. 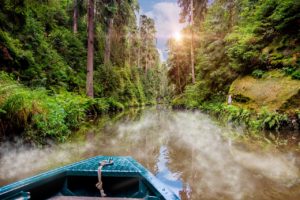 Sitting up and looking around the lake, I begin to row back to shore.  As I did so, looking at where I’ve been in order to get to where I’m going, rowing backwards, I realize, rowing backward is the only way forward.  Thus it is with the Examen.  Regularly taking time to reflect on God’s presence and action in my life leads me to understand how God is calling me to live my life forward while understanding it backwards.

The practice I described above is that of the Examen Prayer – often attributed to St. Ignatius of Loyola and the Spiritual Exercises he developed.  It has five basic parts.

I like to close my prayer time by singing the Sucipe prayer, which was set to music by John Foley, SJ and is sung here by a group of young women:   https://youtu.be/ItJnhOEPiS0

As a Vocation Minister I often accompany women as they discern God’s call in their lives. If you are ready to begin a conversation, contact us here.  Come BE PEACE with us.

Sister Trudy received her Bachelor of Arts from Ohio Dominican College in 1965 and taught in Ohio, New Mexico, and Pennsylvania.  In 1973 she earned her Masters in Education from the University of Dayton, in 1977 received her C.P.E. Certificate from Riverside Methodist Hospital and in 1982 her Masters in Pastoral Ministry from Catholic University.  She began serving in religious education in 1979, and in 1984 was named the Associate Director of Rural Religion Education for the Archdiocese of Louisville.

In 1988 she moved to Port Richey, Florida where she was Pastoral Associate and Director of Adult Catholic Formation for St James the Apostle Parish.  In 2007 she was named to the same position at St Magdalen Parish in Bloomfield, Iowa.

Sr. Trudy touched many, many people during her 60 years of ministry. One priest at a parish where she served said, “I mentioned to the people at my parish how appropriate it was that she passed away at Pentecost, as she was FILLED WITH THE SPIRIT and SET THE WORLD ON FIRE wherever she went!”

She was preceded in death by her parents, Esther and Ivan, and her brother, William. She is survived by her sister, Marianne Lee of Newark, OH, and Kathleen Marie Brooker of Pataskala, OH,  many nieces and nephews, and her Dominican Sisters of Peace Sisters

Sr. Trudy’s life was celebrated at St. Dominic Church in Garden City, KS, with a Vigil Service on Tuesday, May 29 and a Memorial Mass Wednesday, May 30. She returned to her birthplace of Ohio to be laid to rest, where a Vigil of Remembrance Service was held on  Thursday, June 7, with a Funeral Mass on Friday, June 8, at the Columbus Motherhouse Chapel in Columbus, OH. Sister Trudy was laid to rest at St. Joseph Cemetery in Columbus, OH.

You may also give to the Oasis Of Peace in care of:

Condolences may be posted at www.garnandfuneralhomes.com.

For a printable copy of this memorial, please click here.

Who are you afraid of?  So often we don’t accept people because we are afraid of them… we don’t know or understand them.  Throughout the Easter season, Jesus encouraged his followers “Do not be afraid.”  Perhaps, if we take Jesus’ advice and get to know someone we don’t understand, we will be blessed.

Sr. Luisa Derouen shares her experience of getting to know a transgender woman named Dawn and it’s made a profound impact on her life. (Sr. Barbara Kane, O.P.)

One of the first transgender persons I got to know well was Dawn.  She knew of me from a transgender friend, but was afraid to speak with me.  Twice, as a child of five and again when she was eleven, she was warned that God had made her a boy and it was very sinful for her to think otherwise. She was terrified of speaking with another religious professional.  Finally, one day she mustered the courage to call and said she wanted to talk.  She got to my house about 11:00 am.  She was visibly very nervous, but as we talked she gradually relaxed and opened her life to me bit by bit.  We, mostly she, chatted till almost noon.  I invited her to the table while I got our lunch together and put everything out.  We prayed in thanksgiving to God for the food and for all the ways that God sustains and nourishes us.

Then she began again telling her story right where she left off.  I eventually started eating but was aware that she had not yet even picked up her fork.  After about fifteen minutes, I said “Dawn, you haven’t taken a single bite yet. Please, help yourself!”  Her response touched me deeply and I remember it precisely.  “I’m not hungry for food.  I’m just hungry to talk and have someone listen to me who is really listening and not judging me.”  I assured her that she could take as much time as she wanted and she could tell me as much as she wanted, and I would listen.

How ironic that in our media savvy world, it’s so hard to find someone who will listen with the heart and ears of God.  She wants nothing more than to be faithful to God and faithful to who she knows herself to be.  She thought those two couldn’t go together.  But truth always leads us to God, never away from God.

Is there someone you to listen to and not judge?