+ O God, come to my assistance.

+ Glory be to the Creator, to the Redeemer and to the Holy Spirit

Each morning we begin our Morning Prayer from Dominican Praise with this sequence of calls and responses.  Each morning the psalms flow between us, within us and around us as we pray these ancient hymns of praise, lamentation, and glory.

There is a comforting rhythm to this prayer time – there is a grounding and a weaving together of our day.

I have come to appreciate community prayer, especially the Liturgy of the Hours as I’ve lived this life.  At first, praying the Hours was awkward as I fumbled for pages, hymns and the cards with the Canticles that always seemed to be falling from my book just when I needed them.  I recall sitting next to Sr. Barbara in our retreat chapel in McLean, Virginia when I was first learning how to pray the Hours.  I would rush in on the way to work – looking forward to praying Morning Prayer and Mass with the Sisters.  She patiently pointed out where to place the ribbons – which canticle card to use and even nudged me when I got confused as to which group I was supposed to be praying with.  Now, I am the one pointing out where to place the ribbons and which canticle card to have cued up next. 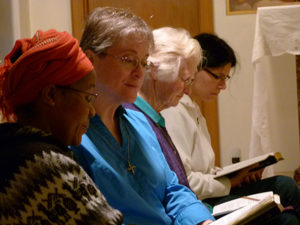 I live in our House of Welcome here in New Haven, Connecticut and have the blessing of living with the women who are new to the congregation – our Candidates.  It gives me great delight to see them become more familiar with community prayer – to begin leading us in prayer and even stretching their spiritual wings as they add a little spice with Lectio Divina or a short preaching on the scripture reading for the day.  We are all enriched by our lives together, the giftedness and willingness of each to embark on this amazing journey of religious life.

Each morning as we begin our Morning Prayer we sing as one to God and we live what it means to be a community of disciples committed to something greater than ourselves.

Interested in learning where the ribbons go?  Being called by God to something more?  Contact one of us to begin the conversation or consider attending our next Come and See Discernment Retreat on September 7 – 9, 2018 at our Motherhouse in St. Catharine, KY.

What is it about kids and a plate glass window? No matter how many times we wipe off their fingerprints, lip smacks and breath marks, they just keep coming back for more. They want to leave an imprint somehow so that we know they have been there.

In the Gospels, Jesus tells us that we are the salt of the earth and lights for the world. As Christians, we need to leave an imprint, too. People need to know that we have been here, too.

Christians cannot stand by while children are being separated from their parents and are herded into detention camps because it is alleged that those parents are coming into this country illegally. News reports show us that the centers are clean; the children have clean clothes and food; they have bathrooms and people to watch out for them. How bad can it be? Except that now suddenly there are “tent” cities being erected by our Department of Health and Human Services and costing millions of dollars, that should help, right? 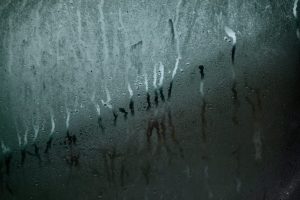 Please pay attention to the news reports and requests for getting in touch with our elected officials. The City Council of New Orleans has filed a joint resolution stating its conviction that the actions being taken are inhumane and even un-American. You know everyone won’t agree with them, but they are leaving their imprint.

This is only one issue where Christians can make an imprint, can be salt and light. The country we live in as Christians needs more salt and lots more light. There are way too many plate glass windows waiting for the imprint of some valiant Christians. 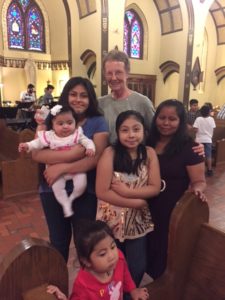 The largest workplace raid this year took place in Salem, OH on June 19. At that time 140 people working at a meat processing facility were detained by ICE and transported to a processing center about an hour away. Around midnight that night, some families began receiving notices that certain people were being released and could return home, either because it turned out that they were working legally or for humanitarian reasons (medical reasons or because their detention would leave children in a home without a parent.) Transportation was coordinated to get them back to Salem.  The next day an additional 15 were released, leaving a total of 80 detained now. The men are all being held near Youngstown while the women are mostly in a facility six hours away near Battle Creek, MI. (Of these 80 we have been warned that many, if not most, face deportation.)

On Wednesday, June 20, a number of local immigration attorneys, as well as paralegals and translators, were available at Centro San Pablo. People poured in as soon as word got around. A local restaurant provided lunch for 150 people that day.

On Thursday, June 21, several representatives from the union representing the employees at the company arrived in town and asked if our site could become their base of operations. They also contacted other local churches involved with the immigrant community to make them aware of the union presence. 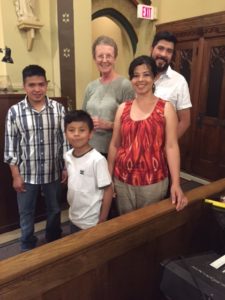 Beginning on Friday and every day since, the union reps have been helping us coordinate the outreach efforts, both to benefit those who are still detained as well as those who are free but no longer have work and the families of all affected.  Several immigration attorneys have been offering pro bono services. We have had the benefit of a number of translators, several of whom have come from as far as Cleveland and Pittsburgh for a day. There are days when we have no attorneys at the Center because they have traveled to the detention centers to meet with detainees.

We have begun asking families to fill out Emergency Assistance Forms so we can get an idea of their needs for the next month or two. Using donations from the union as well as our parish, the local community, churches and beyond, we hope to be able to provide help with basic living expenses (rent, utilities, etc.) for a month or two to allow families time to make wise decisions about their future.

Since the raid happened two days before payday, the union has been able to collect paychecks for all employees. Even if the employee is detained, a relative is able to collect that paycheck at the Center with proper identification. The company will also pay out accrued vacation, etc. so at the moment no one is totally without money,

One of the other churches in town has taken over the task of coordinating food assistance to families besides the resources offered generously by our Salem Community Food Pantry. We have been ensuring the adequate presence of Spanish interpreters at the pantry to assist.

Your prayers and support are greatly appreciated at this time.

God could be working in your life! If you want to know how to hear and recognize His call, join the Dominican

Sisters of Peace in the rolling hills of St. Catharine, KY, for our September 7-9 Come and See Weekend!

This free, 3-day exploration of community life will allow you to meet, pray and share with women of faith who have faced the same decisions that you may be considering. Our Come and See Retreat also lets you experience religious life first hand – from daily prayers to study to the joys of community life.

If you are a single Catholic woman between the ages of 18 and 45, and you believe that you may be feeling God’s hand in your life, join us to come and see for yourself.

Most people don’t realize that slaves are working in our fields here in America. These slaves number in the thousands and we eat the food they produce every day. In the case of the tomato pickers in Florida; however, there has been some progress in eliminating it. This is the state where 90% of our winter tomato crop is grown.

In the last 25 years, between 1200 and 1500 people have been freed from agricultural slavery rings and their captors prosecuted. The workers had been cruelly beaten, shackled in chains at night, housed 20 per mobile home and each charged $200/month for rent. There was no relief from the sun in the fields, no breaks for meals and 10 to 12-hour work days, 7 days/week ~ and for the vast majority, no way to escape.

In 1993, several men in Immokalee, Florida did manage to escape and went to the civil authorities. The Federal Government got involved, prosecuted their case, and won. With help from civil rights groups, the tomato workers have since formed the Coalition of Immokalee Workers, CIW, that now works for safe and fair working conditions. Other areas across the country where slave-conditions still prevail can only hope for similar relief.

The CIW was successful in getting such things as relief tents in the fields, bathroom breaks, meal breaks and work hours limited. But agricultural work is grueling in itself: stoop labor in the fields is back-breaking, workers must wear protective sun gear over every inch of their bodies.  The workers are subject to health hazards from crop sprays, wage theft, intimidation, and human trafficking ~ both sex and labor. All this and the pay is barely enough to feed their families.

The CIW began working for more just compensation for the field workers. Up to this time, the tomato pickers in Florida earned less than 2 cents for each pound of tomatoes they picked. The CIW was successful in getting the 14 top commercial tomato buyers in the US to agree to an increase of a penny/pound.  Among those pledging were Wal-Mart, Whole Foods, McDonald’s, Subway, Burger King, Taco Bell, and Chipotle. The total cost to all the buyers combined, who made this Fair Foods Pledge of a ‘Penny per Pound’ is a mere $4 million per year.

Strangely, Wendy’s is the only one among the five largest food chains that has refused to join. This company was founded in Columbus, Ohio, with its flagship store just across from St. Joseph’s Cathedral.  Wendy’s founder, Dave Thomas, was a big benefactor of ODU, underwriting the renovation of Hamilton Hall many years ago. What has happened to this company since Dave died?

Just south of our border, Mexican workers still endure slave conditions, where both adults and children work six days a week, some for less than $10/ week.  Many go unpaid, are poorly fed, live in rat- and scorpion-infested shacks and punished severely if they try to escape.  Strangely, some of the US businesses listed above which made the Fair Foods Pledge, also buy from these cheaper Mexican farms.

So what can we do?   A lot! Check out the action in today’s OP Peace.