Yes, that city in Michigan where lead-poisoned water began flowing into homes in 2014, after officials switched the city’s water supply to the Flint River as a cost-cutting measure.

Well, nearly five years later – despite the Michigan governor’s declaration in April 2018 that water in Flint is safe to drink and the bottled water program was discontinued — the public-health crisis still exists.

A news report published last week revealed that there are roughly 2,500 lead pipes that still need to be replaced in the city. The projection for completing the work to ensure clean water for all Flint residents is sometime in 2020.

But the lasting effects of the lead poisoning are expected to be ongoing (developmental delays, learning disabilities, behavioral problems, premature births, mood disorders, difficulties with memory and concentration, etc.).

Amid this distressing news are reasons for hope, including an 11-year-old girl named Mari Copeny, aka Little Miss Flint. Three years ago, the young activist wrote a letter to President Obama, prompting him to visit Flint to get a first-hand look at the life-threatening water crisis. Subsequent to his visit, President Obama signed off on $100 million in funding to help repair the city’s poisoned water system.

Since then, Mari has raised more than $350,000 to help empower children (in Flint and beyond) to know that they can make a difference. Mari is proof that you are never too young to advocate for change. 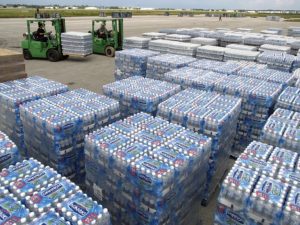 In addition to founding the Dear Flint Kids Project, which asks people from across the globe to send letters of encouragement to children in Flint; distributing backpacks and school supplies to Flint students; and bringing clean water to the people of Flint, Mari is fighting to overcome education inequalities, including the unequal distribution of academic resources.

It is apropos to highlight this young activist today (April 15) – the day that the Student Nonviolent Coordinating Committee was born in 1960 at Shaw University in North Carolina to challenge segregation. SNCC (pronounced “snick”) furthered the goals of the civil rights movement by empowering and organizing young people to challenge injustice on their own terms.

SNCC, which organized sit-ins and freedom rides, demonstrated that young people, like Mari, have the power to further the fight for justice.

The fight is not over – Remember Flint.