Pray and Fast.  “Do not be afraid: I know you are looking for Jesus…” (Matthew) Give us new eyes-give us new understanding-give us courage and new HEARTS to live in loving communion with those escaping from violence and poverty.

Lenten Action.  Commit to reducing your personal carbon footprint.   Wash in cold water… buy your next clothing item at Good Will… drive one fewer trip… reduce food waste.  Check out these articles about reducing carbon footprints. Top 20 Ways to Reduce Your Carbon Footprint and  35 Easiest Ways to Reduce Your Carbon Footprint .

How has racism impacted U.S. Immigration? This week, Network explains that the U.S. has a long history of discrimination against new immigrants. “Examining the history of immigration in the U.S., as well as the laws and customs that changed over decades, illustrates how ‘whiteness’ was manipulated to serve the purposes in power and how ‘White’ was as much as privileged legal and economic status that needed to be protected as it was a racial identity.”   What is your or your family’s experience with this type of racism? Read more.

H. R. 6 Support the Dream and Promise Act! The newly-introduced Dream and Promise Act (H.R. 6) would provide long-overdue, permanent relief and a pathway to citizenship for recipients of TPS (Temporary Protected Status) and DACA (Deferred Action for Childhood Arrivals). It would also go further than DACA by providing much-needed protections to all Dreamers, rather than the narrower subset of DACA recipients. Call or email your representative today.  If you email, go to the Network website. They have customized the message based on whether or not your Representative is a cosponsor of this bill. So email your Representative now to thank them, or encourage them to support!

H. R. 508 Earlier this year, Representative Joyce Beatty reintroduced the Trafficking Victims Housing Act, H.R. 508 which would require a federal study to be conducted to assess the availability and accessibility of housing and related services for victims of trafficking who are experiencing homelessness and those at risk. The bill has been referred to the House Committee on Financial Services and is awaiting further consideration. Let your representative know that you support this bill. 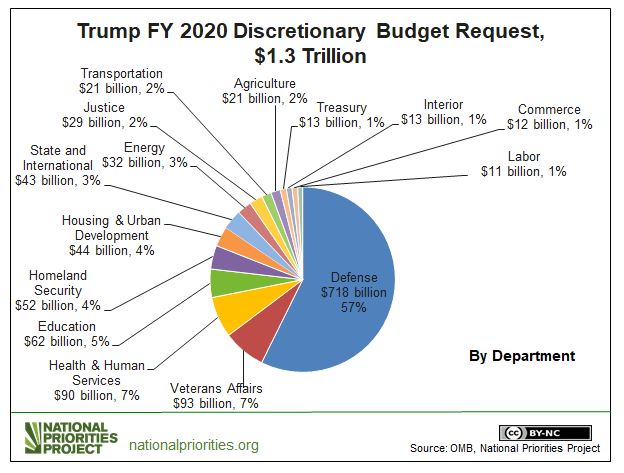 Is this a budget we can live with?  The budget of a city, state, and/or nation describes that organization’s priorities. Many believe that it should reflect the needs of its citizens. People of faith might consider it a moral document that should reflect the responsibilities of government to protect those most in need.    Examining the budget released by the administration gives a clear indication of what’s important to President Trump.

The newly released budget contains another massive five percent increase in the Pentagon budget, while slashing spending for human needs, diplomacy and infrastructure by five percent across the board.  31 percent would be eliminated from the Environmental Protection Agency, 12 percent from the Department of Education, 16 percent from Housing and Urban Development, and more.

There’s $9 billion in the Pentagon budget for “emergency requirements,” widely understood to augment the $8.6 billion explicitly in the budget for the border wall. Part of the military’s increase will also go toward the wall.

Who will feel the impact of Trump’s budget? In addition to the soldiers and civilians killed and wounded in our wars, and those made refugees, we all do. Think about the lack of affordable housing, crushing student debt, immigrants rounded up and detained in military-style raids, people who go hungry in our land of plenty.

Do you benefit from white privilege? Utah Jazz player Kyle Korver believes that it’s the responsibility of anyone on the privileged end of those inequalities to help make things right.

The administration has threatened to cut funding to Central America. The NY Times describes some of the poverty-reducing programs that this foreign aid is funding. Contact your senators and urge them NOT to reduce this aid.

The End of Empathy?  If we ever hope to have peace in the world, we need to be able to connect with the “other.” Hanna Rosin writes about the End of Empathy in which she describes that the “new rule for empathy seems to be: reserve it, not for your enemies, but for the people you believe are hurt, or you have decided need it the most. Empathy, but just for your own team. And empathizing with the other team?  That’s practically a taboo.”  It that what empathy means to you?  Read about this here.

We are blessed to have eight women in formation for religious life.