During a reflection day with the Vocations team, where we pondered what it means to be open, open to God, self, and others, I found myself writing a poem, which I’d like to share with you for your reflection.  Perhaps it will speak to you or elicit other meanings for you on being open.

To be open is to
discover life anew,
be willing to change,
see life differently,
see with God’s eyes,
be God’s servant.

To be open is to
ponder God’s ways,
give ourselves back to God,
find a new beauty,
uncover a new path that unfolds in its own time and place.

To be open is to hear new sounds that fill us with God’s love
for the journey that awaits us.

To be open is to
listen to the voice within,
that stirs us into action,
from a life of complacency.

To be open is to
allow God to move us and to move in us
breathe in new hopes and dreams,
so that we can fulfill God’s ways through our works.,

To be open is to
place our trust and hopes in God,,
knowing we may not always walk a smooth path,
that we may have to walk up long hills
and run down steep curves to be transformed.

To be open we must
let God come and be with us,
be still,
listen,
respond and become a gift to each other.

Are you open to hearing God’s call to become a religious sister?  Why not spend some time reflecting on this question at our next Come and See retreat in the foothills of Kentucky.  Join us September 13-15, 2019 in St. Catharine, KY!  Or, if you just want to talk with someone about your vocation, contact one of our Vocation Ministers.

“To Praise, to Bless, to Preach.”  This is the motto of the Order of Preachers, the Dominicans, and it is the guidance for mission that Dominican Sister of Peace Janet Schlichting has followed through 50 years of religious life—a life of preaching the Gospel that she says, “Has offered me surprise after surprise, peaks and valleys, and adventures abounding.”

Sister Janet entered the Sisters of St. Dominic of Akron in 1967. After First Profession in 1969, she attended the University of Dayton and earned a Bachelor of Science in Art Education in 1972. Her first ministry was teaching art at Our Lady of the Elms, Akron, grades 1-12, now a ministry of the Dominican Sisters of Peace.

She received a Master of Arts in Liturgical Studies in 1979, and helped out with liturgies at the Akron  motherhouse and the elementary school. In 1980 she became an itinerant preacher, working with the friars of the U.S. Southern province and other Dominican women, focusing mainly on missions for parishes in the southern U.S. During this time she also taught liturgy courses in the summers at Loyola University, Chicago, as part of its Summer Pastoral Institute.

Sister Janet returned to the University of Notre Dame and served several years as the assistant director of the Notre Dame Center for Pastoral Liturgy. Then followed a number of years in retreat ministry as preacher, liturgist and spiritual director at Christ the King Retreat Center in Buffalo, MN and at the Dominican Conference Center in River Forest, IL. She then began studies for her Doctor of Ministry in Preaching at Aquinas Institute of Theology in St. Louis. Graduating in 1999, she assumed the position of Assistant Professor and Director of the Graduate Ministry Program at Ursuline College in Cleveland, OH, and then returned to Aquinas Institute as Assistant Professor of Homiletics. During this time she served on the steering committee for Dominican Praise, a Liturgy of the Hours (Divine Office) created by and for Dominican Sisters of the U.S.

She has returned to the Akron area, where she works as artist, retreat preacher, and presenter for adult faith formation, and is now a member of the Dominican Sisters of Peace, celebrating this summer their Tenth Jubilee of Foundation as well as her Golden Jubilee in the family of Dominic.  She reflects, “I continue to be grateful for this life of preaching the Gospel in a variety of ways, for the support of my Dominican sisters and brothers, and for the creativity of the Holy Spirit, who continues to call me toward new adventures in being formed by the Word and understanding what it means to “Be peace, preach peace, and build peace.”

If you would like to donate to the Dominican Sisters of Peace to celebrate Janet Schlichting’s Jubilee, please click here. 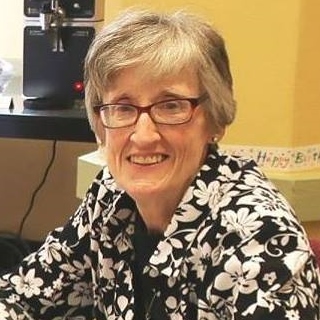 I make my bed every day.  On the rare occasion when I don’t for some reason or another, a part of the day feels a little wonky. I imagine that most of us do the same thing. As adults, the act of making my bed is more important than what it actually looks like.  A made bed is a great start to the day, offering a sense of accomplishment before you even leave the house for work or school or whatever takes up your day.  A made bed creates a small moment of external order in life. It also offers a welcomed space to return to at the end of the day.

I have been interested lately in the 12 Laws of Karma, something I have recently written about and continue to find interesting mostly because these laws exist in just about every cultural tradition in some form or another. It’s a basic rule for living “awake”.

Rule 2: The Law of Creation. You can understand this law by seeing that things outside yourself can tell you what’s going on inside. If you have not made your bed in a long time, it’s a sure sign something is going on inside. If you can’t find the floor of your office because it is covered with paper and stuff, surely something is amiss inside.  If you don’t like your life the way it is now, surely there are external signs of it.  The Law of Creation says that it is up to you to look inside and see what might be causing you to be unhappy. The Law of Creation invites you to actively move in a new direction. Creating happiness involves your own capacity to have your inner life match your outer life.

Our external life mirrors interior life on lots of levels. If I am grumpy to others, I’m probably out of sorts inside myself and might be spending a great deal of energy just to put on a happy face. You don’t need to hold a Ph.D. or be a holy shaman to know that.  Jesus understood that when he said, “In everything, therefore, treat people the same way you want them to treat you, for this is the Law and the Prophets”. (Matthew 7:12)

According to the Karmic Law of Creation, we need to be active participants in our lives if we want to get what we desire. We cannot simply wait for things to happen to us, or worse, blame others for all our troubles. We should aim to see how much our inner life mirrors how we act in our outer life.

So what does an unmade bed tell you? That a happy and creative life requires active participation, and starting with small things. Fullness of meaning, happiness, satisfaction with where we are in the world, does not come by accident. Rather, God expects us to engage, to jump in, to take steps that bring our external world into sync with our internal realities. It is not something we do alone or without context.

For Christians, God’s grace plays an enormous role. We can, by God’s grace, see that our inner life mirrors our outer one. When I reach out to others with kindness, I am creating a more peaceful world. But that reaching out in kindness begins with a kindness inside myself. Sometimes making the bed is the beginning of a peaceful day, in which I indeed do for others what I myself would want for myself.

Sr. Roberta Miller may be celebrating her 50th anniversary of religious life, but in her words, “I have been in formation all my religious life as I come to know myself in all my gifts, faults, and corners softened by the flowing waters of grace.”

Sr. Roberta earned her Bachelor of Arts in History from the College of New Rochelle in 1957, Master of Arts in Social Studies from Hunter College in New York City. Making profession in the Congregation in 1969, she began her religious ministry as a teacher, shaping the minds of middle school and high school students in Columbus, OH and New York and Ossining, NY.

“Community is the framework within which has been the structure and freedom to learn,” Sr. Roberta says. She continued to expand her knowledge of history and people’s culture within world areas by earning her Master of Arts and her PhD from Ohio State University, including a period of study in Mexico City and in Mexico.

She continued her ministry of education in Columbus, serving as a professor in the Sociology and Humanities departments at Ohio Dominican University, a founded ministry of the Dominican Sisters of Peace, from 1983 until 2013.

Today Sr. Roberta is the Coordinator of the Congregation’s non-violence grant through Catholic Health Initiatives. Working with the directors of the Congregation’s Martin de Porres Center, an outreach ministry in Columbus, OH, and the Dominican Learning Center, an adult education center with a focus on immigrants, she facilitates a cross-generational program to prevent violence and build peace and resiliency among the Hispanic community in Central Ohio.

What has 50 years in religious life been like for Sr. Roberta?

“Is it an easy life? No,” she says. “Is it a fulfilling one? Yes. In living and loving in  community, one experiences the joys and sorrows, the heartaches and hopes embedded in relationships and ministry.”

If you would like to donate to the Dominican Sisters of Peace to celebrate Sr. Roberta Miller’s Jubilee, please click here.

This morning’s Gospel highlighted a basic human command “Do to others whatever you would have them do to you.” This past week has been filled with the horrendous conditions at the detention center in Clint, Texas.  How many parents would want their children to experience what the children in Customs and Border Patrol in Clint, Texas and Homestead, Florida are experiencing?  How many parents would want to feel the loss and terror of being separated from their children?

Is this what the United States has come to?  Keeping children locked up in overcrowded cages without soap, water, medical care. Sleeping on concrete floors for weeks?  I’m overwhelmed by sadness and anger when I read about these children.  No one should be treated in this way.  If Customs and Border Patrol cannot handle the influx of asylum seekers then money from other immigration, defense, or other sources should be used to help.  Use the resources that were to be spent on rounding up undocumented immigrants and deporting them to help the situation.

The United States has been abundantly blessed with rich resources, successful businesses, excellent educational institutions.  We value freedom of speech and religion.  We have always accepted immigrants even if we haven’t always been the most welcoming because they make us and our country better.  We profess to be a Christian country but we allow children to be treated in such a horrible way.  Call your representatives. Tell them that they should do what Christ commanded and treat others as they would want to be treated.