Well, here’s another adventure in the back yard —one of my favorite places.  A mother bird built a nest on the upper curve of a downspout outside the back door. An ingenious spot that provides shelter overhead from the roof eaves and added protection because it is up high.

We’ve been watching her movements and trying to sort out what’s going on in the nest. We concluded she was incubating some eggs because for the longest time she would sit there for hours and hours without leaving. It’s almost impossible for us to see into the nest because of its location.  There was just no way for us to get up there and look inside. It was killing me.

Sure enough, after a few weeks of keeping vigil, she had some babies. We think two.  We figured that’s because she was fussing in the nest, going back-and-forth and poking at whatever was in there. Her behavior definitely changed and there was a lot of activity going on. One day, by some little miracle I was looking out the kitchen window, trying to get a better glimpse of the nest.  At just the right angle, in a split second, mother bird shows up with a worm in her mouth and up pops the big mouth of a tiny baby bird. Without hesitation, the mother dropped the worm into the baby’s mouth.  I was startled by it and could hardly believe that I happened to be in the right place at the right time for a half a second to witness this amazing thing. 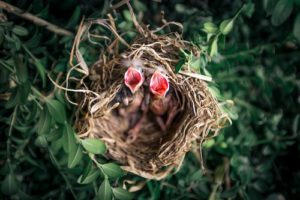 I still feel the shock of it, the startled jolt that went through me is still so real, even as I wonder if I could have imagined it. But it happened. A split-second surprise, when nature astonishes. How does she know how to do this? Nature instinctively and with intelligence finds what is needed for life. No one told her how to build a nest or why she needed to sit and warm the eggs. No one told her to find food and feed her young. She just knows. A mere sparrow.

And He said to His disciples, “For this reason, I say to you, do not worry about your life, as to what you will eat; nor for your body, as to what you will put on.  For life is more than food, and the body more than clothing. Consider the ravens, for they neither sow nor reap; they have no storeroom nor barn, and yet God feeds them; how much more valuable you are than the birds! And which of you by worrying can add a single [hour to her life’s span? (Luke 12: 22-25)

So what’s the message for today?  Don’t worry and stay ready – be alert for surprises.  At a moment’s notice, God can break into an ordinary day and surprise you. Be on the lookout for it. Through nature, the smile of a stranger, the words of a child. Any minute, in a split second, you might get a visit from the divine.

It takes paying attention. Be ready for anything. I think God is just behind the door, around the corner, poised in a hidden place, waiting for us to notice something wonderful.

Stay alert. Try not to miss it.