I have gun safety legislation on my mind.  The governor of Ohio (Mike DeWine) just spelled out his plan to prevent gun violence in Ohio. This was especially important since we had a shooting in Dayton, Ohio where nine people were killed.  The citizens of Dayton and neighboring cities demanded that he “DO SOMETHING.”   Unfortunately, Governor DeWine’s proposal falls short of expectations.

It’s really baffling to me why our legislators, both state and federal, have so much trouble protecting their constituents from gun violence. After all, the costs associated with it are huge. The Gifford Law Center to Prevent Gun Violence reports these statistics: 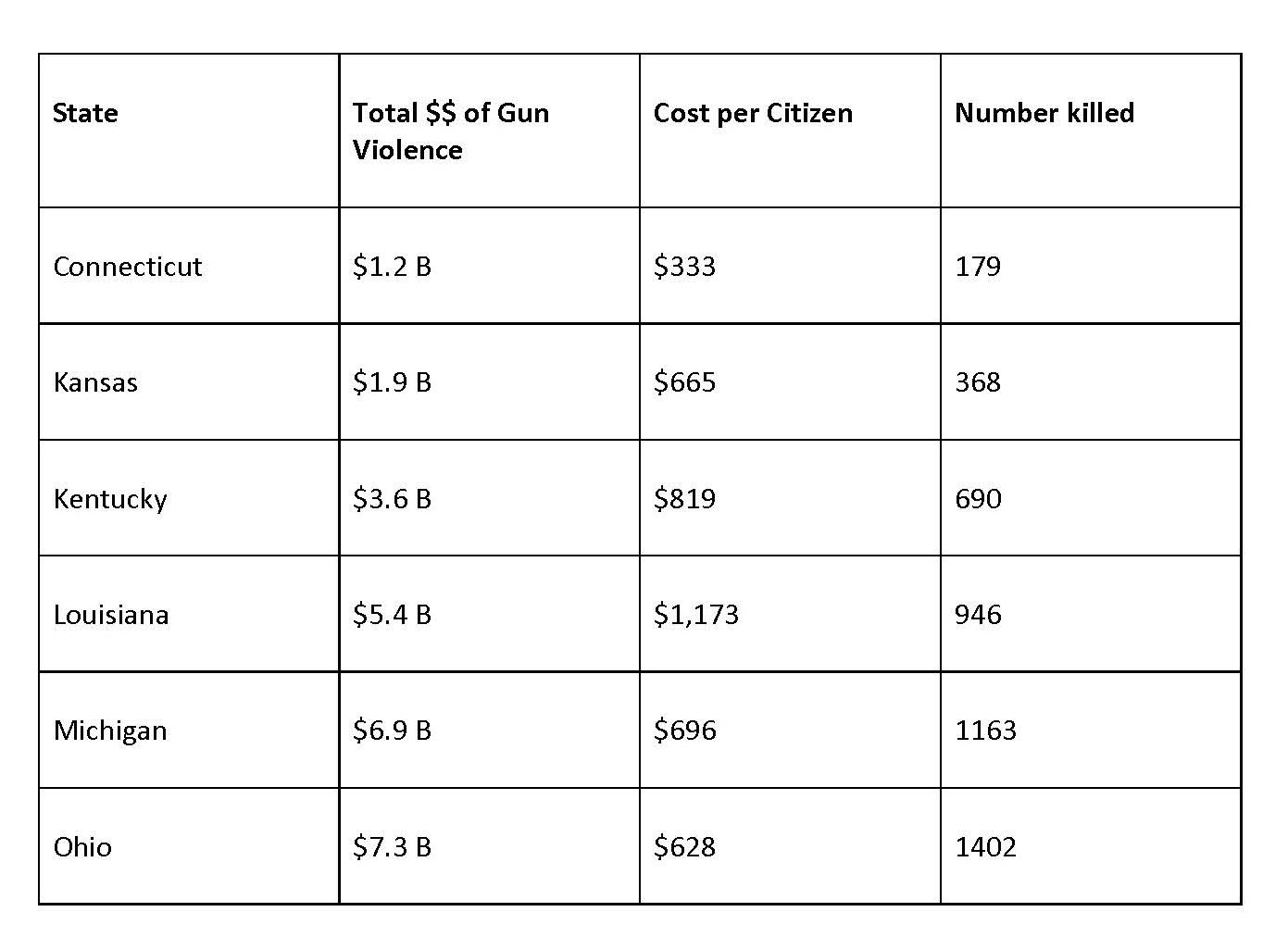 These healthcare costs, costs to employers, law enforcement and criminal justice costs and lost income add up to the billions.  Yes, you read that right, billions!  Interestingly, Connecticut has the most restrictive gun laws in this group and they have the fewest people killed and lowest costs associated with gun violence.  So much for more guns providing safer neighborhoods.

Wouldn’t it be nice to have some of that money for things like education, healthcare, job training, refugee resettlement, etc?

Polling by the Washington Post – ABC found that “89% of voters support expanding background checks to cover private sales and gun-show transactions and 86% support Red Flag provisions that allow guns to be taken from people judged to be a danger to themselves or others.”  These include Republicans, white evangelical Christians, and gun owners.  Really how much clearer do citizens have to make themselves about this issue?

That’s what’s so disappointing about Governor DeWine’s proposal.  It doesn’t include either of these issues.   There are a bunch of bills sitting in Ohio’s House and Senate.  Just sitting… since they have not had a hearing.  It’s kind of like Federal House Bill 8 which was passed by the House. It’s a Background Check Bill that has yet to even be introduced into the Senate.  It just sits even though the vast majority of citizens want it passed.

In almost every one of the states where we minister, advocates are working to pass gun safety legislation or stop dangerous gun bills like Ohio H.B. 178 or Kansas S.B. 45 which are Permitless Carry Bills.  Unfortunately, Kentucky recently enacted a law that would allow anyone who legally owns a gun to carry it concealed under a coat, in a purse or hidden in a holster without a permit and without any training requirement.

There is plenty of evidence that less gun legislation results in more gun violence.  It’s really time for all our legislators to DO SOMETHING and stop the proliferation of guns in the U.S.