Does the name William Felton Russell mean anything to you?

If not, maybe you know him by Bill Russell — the 11-time NBA champion, five-time MVP, 12-time All Star, Olympic gold medalist, two-time NCAA champ and recipient of the Presidential Medal of Freedom who fought for civil rights his entire career, financially supported the movement as one the NBA’s biggest stars, held his Boston Celtics team’s fans accountable for their racism, and convinced his entire organization to forfeit a game because a restaurant wouldn’t serve black customers..

Did you know that just last week he accepted his Hall of Fame ring, despite being inducted into the Naismith Basketball Hall of Fame in 1975?

What took so long for the basketball legend (and the first African-American player to be elected to Hall of Fame) to acknowledge the honor? (He essentially boycotted the ceremony back in 1975 for “his own personal reasons”)?

We got the answer last week, after he accepted his Hall of Fame ring in a private ceremony at his home – he was waiting for the NBA to induct Chuck Cooper, the first African-American player drafted by the NBA (in 1950).

That finally happened this year. 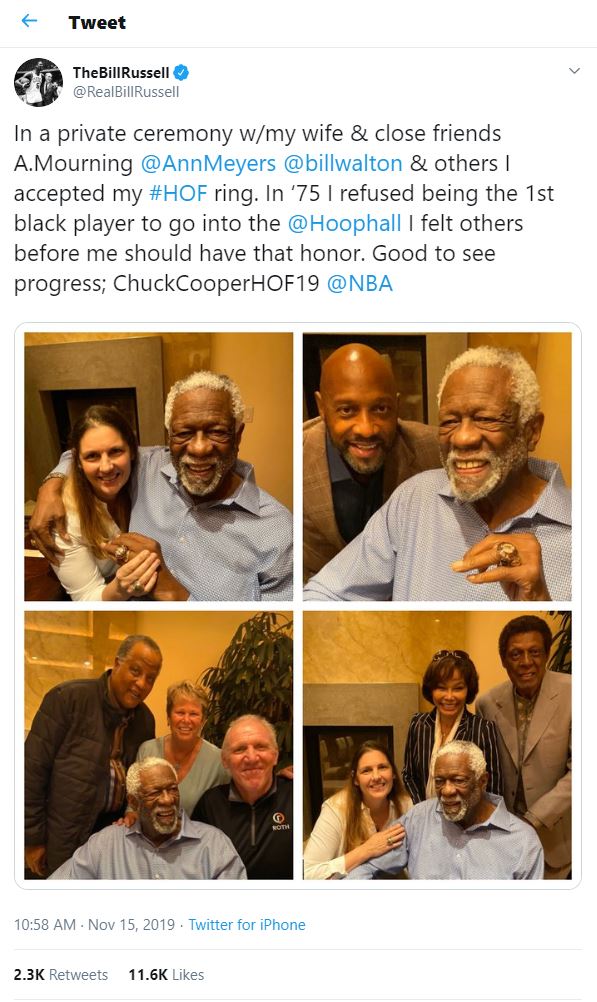 The moral of this story, for me: We are all standing on someone’s shoulders – benefiting from the work and experiences of those who came before us.

Whose shoulders are you standing on?

And who is standing (or will stand) on yours?

“You have been paid for. Each of you, Black, White, Brown, Yellow, Red — whatever pigment you use to describe yourselves—has been paid for. But for the sacrifices made by some of your ancestors, you would not be here; they have paid for you. So, when you enter a challenging situation, bring them on the stage with you; let their distant voices add timbre and strength to your words. For it is your job to pay for those who are yet to come.”  — Maya Angelou

9 responses to “GIVING CREDIT WHERE CREDIT IS DUE”