“What do we tell these children about how to stay out of harm’s way when you can be at your own house, minding your own business, surrounded by your entire family, and they still put some murder on you that you ain’t do and send you to death row?” (a quote from Just Mercy movie) A teacher for nine years, behavior management was part of my ministry. Thus, when I heard this statement from the movie “Just Mercy,” I was speechless.

Based on a true story, “Just Mercy” addresses the racial bias and the inequality of our criminal justice system. It also raises awareness of the truth about incarcerated women and children, the concern for children being sent to life-imprisonment, and military veterans who don’t receive the care they need after their deployment. The movie follows the life of Mr. Walter McMillan and the work of Bryan Stevenson.

Walter McMillan was an innocent black man who was wrongly convicted of the murder of a white woman. Walter was sentenced to death because of racial bias for a crime he did not commit, which he understood as: “You’re guilty from the moment you’re born.” (Walter McMillan in Just Mercy) 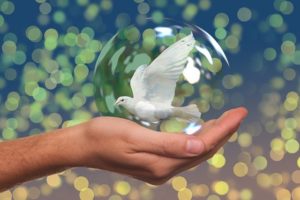 were sentenced to death row. He raised the awareness that “constantly being suspected, accused, watched, doubted, distrusted, presumed guilty, and even feared is a burden born by people of color that can’t be understood or confronted without a deeper conversation about our history of racial injustice.” So, Bryan set out to Alabama. His mother tried to protect him by saying: “Look, what you’re doing is going to make a lot of people upset.” But Bryan stayed committed to his plan: “But you always taught me to fight for the people who need the help most. (…) My job is not to make people happy. It’s to achieve justice for my client.”

Bryan’s quest is a movement, not just a book or movie. He continues to fight for justice and to help people recognize the dignity of each person. “We are all more than the worst thing we’ve ever done,” he said. Read more about his ministry at Equal Justice Initiative, click on Our Work section.

Dominican Sister of Peace Kathy Broussard commented similarly in an interview when she was asked about her ministry with the inmates: “It’s not my job to ask people to excuse those who have committed capital crimes. It is my job to humanize my client to a jury. Many of my clients have grown up in terrible environments. They may be mentally or intellectually handicapped. One person is on death row for a crime that he did not even commit. More and more death row inmates are being exonerated.” Sr. Kathy continues working with inmates, families, parole officers and more to mitigate the death penalty one life at a time. To read more about Sr. Kathy’s ministry, click here.

There are other Sisters who serve the convicted. One way Sr. Rose Bowen, OP, lives out her call is by serving in prison retreat and visitation ministry. Another way is how Sr. Germaine Conroy, OP, continues to be a member of the Circles for Restorative Justice, a program which offers the opportunity for youth who have been arrested to come before a group to present and complete a plan, which will enable them to have their criminal record cleared. Another way Sisters and Associates are involved is to host a dialogue or prayer service bi-monthly through the “Building Racial Harmony series.” The goal of the ministry is to provide a safe space to dialogue about issues of race and racial justice and to establish the Motherhouse as a center of prayer around the issue of racial justice. The hope is that those who participate will be inspired, motivated, and equipped to work toward racial justice. How is God calling you to make this world a more peaceful and just place?

To see more about how the Dominican Sisters of Peace make the world a more peaceful place, check out our video premiere on Facebook, Wednesday, February 5, at 6 pm EST.

7 responses to “How is God calling you to make this world a More Loving and Peaceful world?”