April brings thoughts of the beauty that surrounds us. Flowers with a rainbow of colors abound, and the gray of winter disappears. Even though we are limited in our movement because of the coronavirus, the beauty is there to inspire. April also brings to mind Earth Day and all that has happened since April 22, 1970, when Senator Gaylord Nelson hosted an environmental teach-in.

Fast forward to 2020 and we find rubble in many forms:

Is there any good news in today’s reality? 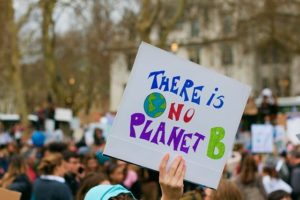 While our government is ignoring an environmental crisis, individuals are stepping up with a determination that inspires. Students have made the streets their new classroom, drawing attention to climate change and the urgency of the most critical concern of our day. While that may not make parents or principals happy, their voices need to be heard—this is their future!

I have been impressed by students who are collecting plastic bottle caps.  These caps are sent to a company that produces benches and picnic tables made from this normally-discarded plastic.  More individuals are refusing to use plastic straws, instead using metal straws, or simply drinking from the glass.

Informed citizens know the state of our plastic-infested oceans.  The Pacific Ocean is now called ‘plastic island” because it contains an amount of plastic twice the size of Texas, harming marine life and destroying ecosystems. We dump 150 million metric tons of plastic in all of our oceans, and add eight million tons each year, according to the Stanford Center for Ocean Solutions. One survey found plastic in 94% of our tap water.

What better time than this “Earth Month” to make a difference with our choices and our voices.