Once again, our Dominican family focuses on December as “a Dominican Month for Peace.” From Columbia, the Democratic Republic of Congo, India, and now Ukraine, we direct our attention to a country struggling with the effects of violence and war.

UNICEF, a worldwide nonprofit organization providing relief to Ukraine, describes the situation as an ongoing challenge, especially for children: “After seven years of conflict, women and children in Eastern Ukraine remain extremely vulnerable. The conflict is taking a heavy toll on civilians: regular ceasefire violations, damage to homes, and social infrastructures lead to mine contaminations and limited access to services.”

Dominicans have long been a presence in Ukraine, first in the 13th century, and survived through the reign of the Austrian emperor, Joseph II, who closed many monasteries.  With the arrival of Soviet authorities, services in churches were stopped, and many Dominicans were expelled or killed.  In 2020, Dominicans are focusing on peace as it applies to the youth of Ukraine.

International Dominican Justice Promoters tell us that Dominicans are working with youth through the St. Martin de Porres Center in Fastiv, caring for socially disadvantaged children: orphans, street children, sick children, and children from disadvantaged families.  Since the beginning of fighting in Eastern Ukraine, the center has accepted 220 children from the combat zone, offering the opportunity to recover in a safe environment. 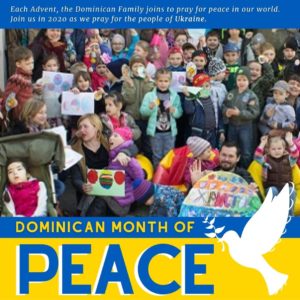 The situation is dire for children.  According to HOPE NOW there are between 70,000 – 110,000 orphans in Ukraine, housed in 650 institutions across the country.    Most are considered “social orphans” because of abuse, abandonment, or extreme poverty.  Many with disabilities die because they do not get the medical treatment needed.

Ukraine arrived in this situation after gaining independence from the Soviet Union in 1991.  With independence came instability and an economic downturn.  Factories closed. Soviet daycare programs ended. Poor medical care meant the early death of parents. Because of abuse and neglect, many children depended on orphanages to survive.  At age 16 the children must leave the orphanage and are not able to provide for themselves due to a lack of basic skills.  It is estimated that 60% of those leaving orphanages turn to crime or prostitution to support themselves.

Thanks to the work of Dominicans in Ukraine, this bleak scene has received some light.  We are surrounded by the need for justice and peace in our world, and Ukraine stands out as a troubling and dangerous place for youth.  We stand in solidarity with Dominicans there in prayer and moral support.

One response to “Remembering Ukraine”