January 11 – February 8 is Human Trafficking Awareness Month. This annual observance is designed to bring attention and action to modern-day slavery in all its forms – sexual and labor-related.

Human trafficking is a crime that involves compelling or coercing a person to provide labor or services, or to engage in commercial sex acts. The coercion can be subtle or overt, physical or psychological, according to the federal definition provided by the US Dept. of Justice.

According to the International Rescue Committee, traffickers prey on individuals who are poor, vulnerable, living in an unsafe or unstable situation, or are in search of a better life. In the United States, victims include some of the most vulnerable populations: American Indian/Alaska Native communities, lesbian-gay-bisexual-transgender-questioning individuals, individuals with disabilities, undocumented migrants, runaway and homeless youth, temporary guest-workers and low-income individuals.

This graphic from the 2019 Data Report by the Polaris Project illustrates the state of human trafficking in the United States. 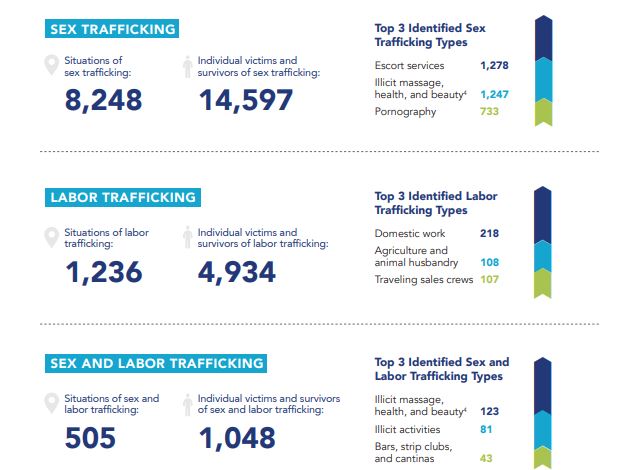 The COVID-19 pandemic has offered traffickers the opportunity to create new ways to take advantage of the pandemic to target vulnerable victims. In particular, the pandemic has surfaced systemic and deeply rooted economic inequalities – a root cause of human trafficking.

One of the Congregational Commitments of the Dominican Sisters of Peace is to:

Promote justice through solidarity with those who are marginalized, especially women and children, and work with others to identify and transform oppressive systems.

More than 70% of those who are trafficked around the world are women. Our Sisters work to create new systems that offer those women the opportunity to avoid or escape trafficking, to lobby officials to create ways to end trafficking, and to offer mercy and relief to victims of what the Holy Father calls “a wound in the humanity of those who endure it and those who commit it.”

For a calendar of prayers for National Human Trafficking Awareness Month, click here.

The Economy of Human Trafficking

US Department of State