By Sr. Luisa Derouen, OP, for the Global Sisters Report

It was time for shift change, so the nurse going off was briefing her replacement. One of her patients was transgender, and she said to the nurse coming on duty, eyes rolling with a sarcastic tone, “It’s one of those.” Basically, that translates as “it says it’s female, but we know it’s really male. You’re stuck with one of those freaks on your shift.”

Have you ever been called an it? Can you imagine what it would feel like for someone to be so rudely dismissive of your very humanity?

Some transgender people know exactly what that feels like. My friend David is a registered nurse as well as transgender. He has been on the patient side and the staff side of how the humanity of transgender people is denigrated, denied and disrespected by medical providers. Increasingly, this issue is making its way to mainstream media and exposing the many challenges transgender people face seeking health care.

Why should the medical experiences of transgender people and their families concern me? That is not my expertise at all. I’m a spiritual director. Well, here’s why: we are each a unique body-soul creation of God.

A favorite psalm verse for many people declares “You created my inmost self, and I am wonderfully made” (Psalm 139:13). This verse begs for affirmation as my heart breaks, hearing so many stories of transgender people whose precious body-selves are not reverenced when they seek medical care. For 21 years I have borne the weight of the cross with them when they are told by words and actions that their humanity is not wonderfully made; that who they are does not reflect the beauty of God’s creation.

Transgender people make incredibly difficult decisions and take life-changing risks in order to honor their body-soul personhood. When they are not treated with respect when seeking medical care, their whole person is wounded and traumatized.

Sometimes medical staff lack proper training. Vincent shared with me his experience trying to make an appointment at a Catholic hospital for an OB-GYN checkup. The nurse at the other end of the phone questioned, “I have to ask if you have had the surgeries? Do you still have your female parts down there?” In horror he responded, “I’ll discuss that with the doctor. I’m not comfortable discussing that with you over the phone.” She insisted on an answer right then, which made him extremely uncomfortable, so he now shies away from any OB-GYN care entirely.

A doctor shared a common experience. The doctor was called to the emergency department for a badly injured trans woman whose only option for care was this Catholic hospital. The name listed was the patient’s legal male name, but the patient was presenting as female. She was clearly traumatized and crying. The young doctor reassured her and stated, “I’d like to take the best care of you I can. How do you prefer I address you?”

The patient smiled, exhaled in relief, and stated her preferred name. A bit more at ease now, she disclosed that she avoids medical care because she is treated so badly. The doctor was careful to include her preferred name on the chart alongside her male legal name. But the doctor learned later that the information included to respect the trans patient was removed by a more senior doctor because it was “unnecessary and just cluttering up the list.” Now this woman was traumatized for her injuries, and again for being deliberately made invisible.

Bishops who have spoken publicly have rightly insisted that transgender people must be treated with respect and compassion when they seek care at our medical facilities. But most make it very clear that people who identify as transgender are to be acknowledged by only their legal name and sex assigned at birth. Let me be clear: It is impossible to extend compassion and respect to people while at the same time insisting they do not exist. For this reason, transgender people avoid contact with medical personnel as much as possible, even to the extent of seriously compromising their health. 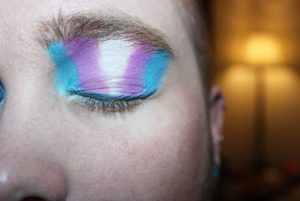 amilies, as well as the transgender person, are profoundly affected. Peggy is the mother of a transgender adult child. She is a university professor and has long been an ally of LGBTQ+ people, but hadn’t personally known a transgender person before her own child shared that she was transgender. She struggled to understand but believed what her child was saying and wanted to be supportive.

In this fragile state, Peggy met with their Catholic family doctor, whose medical competence they had relied on for years. She was eager to learn from him what to expect by way of possible medical interventions so she could be knowledgeable and supportive of what was in the best interest of her child. She was totally taken aback when “he flew into a rant against what he sneeringly referred to as ‘transgender medicine’, expressing outrage that such a field had been developed in recent years. He insisted the science hadn’t changed, though it clearly had. He declared that I should deny my child’s experience because they could not possibly be real. He said it’s ‘like a cult’.”

A very long list of reputable medical entities confirms that being transgender is an acknowledged reality and that transgender people have a right to appropriate medical care. It is not a cult or anything like a cult. Transgender people are not subscribing to any sort of “gender ideology,” which is a claim that a number of bishops have made.

Sometimes, though rarely, a trans person has a positive experience with medical providers. As a high school junior in 2012, Michael attempted suicide and was brought to the psychiatric ward of a Catholic hospital. The doctors, nurses and staff called him Michael and validated his experience with support and acceptance. At his request a priest came to see him who, like the staff, listened nonjudgmentally and sensitively. Michael pointed out to me, “This experience was at a pivotal moment for me, and I am so grateful for everyone there. I’ve had harmful experiences, but this one stands out because it is so rare.”

Tragically, almost all transgender people have stories of traumatizing experiences with medical providers who refuse to believe that they are who they say they are, and whose health is significantly compromised as a result. This is especially tragic when it occurs in Catholic medical facilities.

They are the precious body of Christ as truly as anyone. “The temple of God is holy, and you are that temple” (1 Corinthians 3:17). It has often been pointed out that we Catholics would never dream of disrespecting the body of Christ we receive in Communion, but we don’t hesitate to disrespect the body of Christ in the person before us, especially those whose Christ-like humanity makes us uncomfortable. What a balm for many transgender people are the words of Cardinal Wilton Gregory. At a Theology on Tap session in August 2019, he responded to a transgender man by saying: “You belong to the heart of this church. There is nothing that you may do, may say, that will rip you from the heart of this church.”

Transgender people are the body of Christ too.