Reading through the Sunday paper account of the happenings at ‘Injustice Square’ in Louisville marking the first anniversary of the murder of Breonna Taylor, we read:

But wait, what did we miss? We (Sr. Charlene Moser, OP, and Associates Rosie Blackburn and Marybeth Irvine) were there. Why did we need security? Who was posing a threat? We were aware of our surroundings. We saw a couple of silhouettes on the rooftop but no sign of weapons. We saw some LMPD police. We saw barriers blocking thru traffic. All just watching. More predominant was an incredible mix of human beings who were present to remember Breonna’s life, death, and the absence of accountability for the loss of both. We saw a community of people who crossed many barriers to be present with one another.

So where was the perceived danger? For us, the threat was presented by our so called ‘protectors.’ These individuals who roamed through the gathering with their military style weapons and ammunition. This is what frightened us. This group of mostly white males roamed in and out of the gathering looking like they were patrolling a hostile environment. But there was no hostility; there was no danger. What were they doing there? What is it about our society that makes individuals think they need to show this kind of power? Yes, there were also individuals packing their sidearms in our open carry state but they were not a menacing presence. As women, as white women, we were fearful. We wonder how others felt. Did they feel safer, protected? Or were they, too, ill at ease. Is this the kind of situation the framers of our Constitution had in mind when they gave us the right to carry arms? Something seems to have been lost in the translation.

We, Dominicans of Peace, corporately stand for common sense gun reform. Hopefully this reform will include an end to practices that allow guns to be present as a means to intimidate peace seeking individuals rallying for justice. 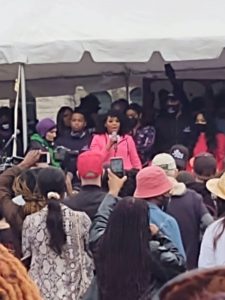 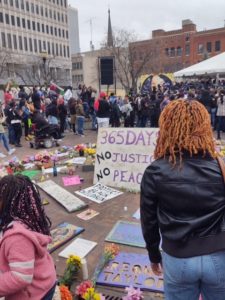