“I thought I’d spend my life in the little triangle of a parish: living in the convent, teaching in the school, praying in the church, and, if lucky, getting to the dentist twice a year.” That’s how, late in life, Sister Elaine Virginia DesRosiers, O.P., ’66M.S, recalled her embrace of her religious vocation as a teenager in 1948. 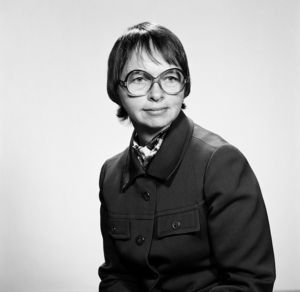 Her first 15 years as a Dominican nun went according to plan. Then the Second Vatican Council — and six summers studying biology as a graduate student at Notre Dame — changed everything, transforming the former grade-school teacher into a TV host and audiovisual expert who would lead the University’s trailblazing foray into the world of the computerized classroom.

The former director of educational media at Notre Dame, known as much for her oil paintings, her summer film festivals, her effervescent warmth, her hope and her heart for the poor as for her landmark contributions to campus technology, died December 16, 2020. She was 90.

Having completed her master’s degree, DesRosiers returned to the Boston archdiocese where she grew up, creating The World of Biochemistry, a televised course for high school students broadcast by the Boston Catholic Television Center. The experience led to doctoral studies in educational media and skills that landed her back at Notre Dame in 1976 as head of a small unit that mostly dispersed students and their AV carts through the halls of classroom buildings, but in time would oversee the genesis of a campuswide computing network.

By 1992, DesRosiers and associate director Michael Langthorne had spearheaded plans for DeBartolo Hall, with 84 classrooms wired into a centralized system that enabled professors to use the latest digital and visual media in their courses. As of her retirement in 1997, representatives from more than 650 universities around the world had toured the building.

“Everything concerning people and their betterment — she was into it,” recalled her friend, Gerald Gingras, professor emeritus of Spanish literature at Saint Mary’s College. “She had a total commitment to humanity and saw goodness at every level.”

Returning to her motherhouse in Springfield, Kentucky, DesRosiers’ artistic talents garnered commissions to paint historic and religious buildings — and a Fra Angelico Award from the Dominican Institute for the Arts.

“I recognized that this life of mine has been one big act of gratitude,” she once wrote. “St. Catherine’s teaching, ‘Of myself I am nothing. With God’s gifts I am everything,’ has imbedded in me a deep, deep sense of gratitude to God, the giver of my gifts.”

One response to “Notre Dame Death in Our Family: Sr. Elaine DesRosiers”